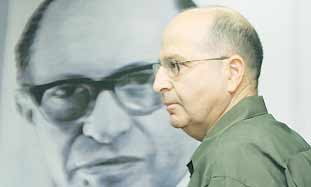 Israel is already “in a military confrontation with Iran,” Ya’alon said.

Israel’s advances in weapons technology would given it an advantage in any war with Iran, as well as greater capability to fight in Syria and in the Gaza Strip, Deputy Prime Minister Moshe Ya’alon said on Monday. “There is no doubt that the technological capabilities, which advanced in recent years, have improved range and aerial refueling capabilities,” he told Army Radio.

Ya’alon, a former chief of the IDF General Staff, spoke as the Iranian Navy conducted maneuvers in the Persian Gulf, testing new weaponry.

Israel is already “in a military confrontation with Iran,” Ya’alon said.

The new weapons capabilities “can be used for a war on terror in Gaza, for a war in the face of rockets from Lebanon, for war on the conventional Syrian army, and also for war on a peripheral state like Iran,” he said.

Ya’alon spoke at a conference at the Fisher Institute for Air and Space Strategic Studies in Herzliya.
Posted by GS Don Morris, Ph.D./Chana Givon at 6:44 AM