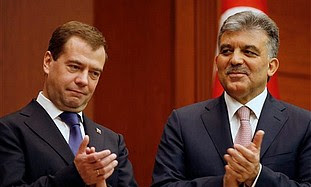 The Foreign Ministry issued an uncharacteristically sharp response on Wednesday to a Russian and Turkish call to include Hamas in the diplomatic process, drawing parallels between Hamas and Chechen terrorists and saying it was wrong to distinguish between “good” and “bad” terrorists. The statement, released at the directive of Foreign Minister Avigdor Lieberman, who is currently in Tokyo, said Hamas was a terrorist organization that set as its goal the destruction of Israel.

“Hamas people are responsible for the murder of hundreds of innocent civilians, including those who came from the former Soviet Union, and also Russian citizens,” the statement said. “It is forbidden for enlightened countries to divide terrorists into good and bad ones on the basis of geography.”

“There is no difference between Khaled Mashaal and Shamil Basayev [a Chechen leader who was killed in 2006],” it read.

“Israel always stood behind Russia in its fight against Chechen terrorism, and would have expected similar treatment regarding Hamas terrorism against Israel,”the Foreign Ministry statement said.

What raised Israel’s ire was a comment Russian President Dmitry Medvedev made in Ankara on Wednesday, during a visit with Turkish President Recep Tayyip Erdogan, saying – in a clear reference to Hamas – that no one should be excluded from the Mideast peace process.


Although Russia is a member of the Middle East Quartet, which also includes the US, EU and UN, it has never accepted the Quartet principles that there should be no engagement with Hamas until it forswears terrorism, recognizes Israel and accepts previous agreements. Russia is one of three European countries that continue to maintain contact with Hamas, the others being Turkey and Norway.

While this is not the first time the Russian leadership has met with Mashaal, this is the harshest response that Israel has ever released regarding the matter, and one diplomatic official said it reflected deep frustration in Jerusalem.

At the same time, the official said there was little concern that just because Russia and Turkey wanted to see engagement with Hamas, other Western countries would follow suit.
Posted by GS Don Morris, Ph.D./Chana Givon at 6:40 AM