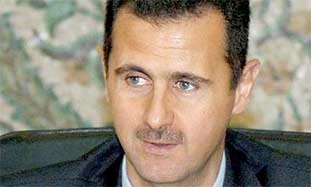 Amid concern over the possibility that Syria has transferred Scud missiles to Hizbullah, The Jerusalem Post has learned that Israel recently asked Syria to set up a mechanism for trilateral talks via the United Nations force deployed in the Golan Heights, UNDOF, which could be used to neutralize points of friction along the border. Diplomatic sources said Monday that the idea for the establishment of such a mechanism with Syria had been floated four years ago, after the Second Lebanon War in 2006.

According to the sources, no one at the time really believed the Syrians would go for the idea, but it was brought up with UN officials. It was not a formal Israeli request, and the idea – apparently because of a lack of Syrian interest – went nowhere.

Several months ago, though, the IDF again raised the idea and asked the outgoing commander of UNDOF, Gen. Wolfgang Jilke, to propose it to the Syrians, who rejected the invitation.

According to a report in the Kuwait-based Al-Rai newspaper on Monday, Syria has transferred Scud missiles to Hizbullah. However, the missiles were recently transferred to Lebanon, prompting a stern Israeli warning that it would consider attacking both Syrian and Lebanese targets in response.

As a result, and in an effort to prevent a new conflict, the US State Department summoned the Syrian ambassador in Washington, Imad Mustafa, and warned him that war could break out if the weapons shipments were not stopped.

At the same time, according to the Wall Street Journal, the IDF came very close recently to attacking a convoy carrying weapons from Syria to Lebanon, but at the last moment decided against it.

The possibility that Syria would transfer Scud missiles to Hizbullah is not a new fear in the Israeli defense establishment.

According to the Kuwaiti daily, Israel sent warnings to Syria through Turkey and Qatar that it would “bomb Lebanese and Syrian targets in case the missiles crossed the border and reached Hizbullah.”

In related news, Col. Ronen Cohen, former head of the Northern Front in Military Intelligence and the current chief intelligence officer for the IDF’s Central Command, said in a research paper that an Israeli bombing of Lebanese national infrastructure would likely unite the Lebanese people behind Hizbullah and its leader, Sheikh Hassan Nasrallah.

Cohen wrote the document several months ago as part of his university studies and it was published by the International Institute for Counter-Terrorism. It comes after Israeli leaders, including Prime Minister Binyamin Netanyahu and Defense Minister Ehud Barak, have warned that infrastructure would be targeted in a future conflict with Hizbullah.

“Hizbullah is not our target. Our target will be the state of Lebanon,” Barak said in late November.

Cohen, on the other hand, warned in his paper that attacking infrastructure during the Second Lebanon War in 2006 would have united the Lebanese people against Israel and behind Hizbullah. During the war in 2006, the IDF recommended attacking Lebanese infrastructure, but the government ruled against it.

“The decision of Israel’s government (which opposed that of the military) not to attack Lebanon state infrastructure (e.g. electricity) led to friction in the foundations of the national Lebanese unity and solidarity pillar, which Nasrallah had struggled to maintain,” Cohen wrote. “It is plausible that attacking infrastructure would have been a catalyst to national unity and positioned Hizbullah and its opposition from home‚ on the same side of the political map.”
Posted by GS Don Morris, Ph.D./Chana Givon at 3:14 PM