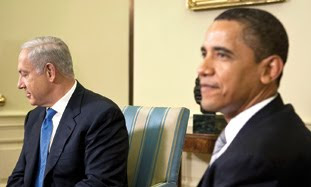 An IMRA poll finds that a landslide majority of Israelis are against a US imposed peace agreement dividing Jerusalem and ceding the Jordan valley.

A huge majority of Israelis would oppose an attempt by US President Barack Obama to impose a final-status agreement with the Palestinians, a poll sponsored by the Independent Media Review and Analysis (IMRA) organization found this week. Leading American newspapers reported last week that Obama was considering trying to impose a settlement if efforts to begin indirect proximity talks between Israel and the Palestinians proved unsuccessful. The option was discussed in a meeting with current and former advisers to the White House.

Asked whether they would support Obama imposing a plan dividing Jerusalem and removing the Jordan Valley from Israeli control, 91 percent of Israelis who expressed an opinion said no and 9% said yes, according to the poll of 503 Israelis, which was taken by Ma’agar Mohot on Sunday and Monday and had a 4.5% margin of error.

Eighty-one percent said it was improper for Obama to try to force such a plan on the two sides, while 19% of those who expressed an opinion said it was proper.

The poll asked whether it would create enduring peace or enduring conflict should Jerusalem be divided, with Jewish neighborhoods remaining part of Israel and Arab neighborhoods becoming part of a Palestinian state. Eighty-four percent said conflict and 16% said peace.

The numbers were similar for the Jordan Valley, where 90% opposed relinquishing Israeli control and 10% were in favor.