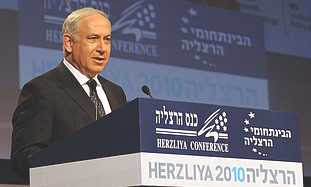 Seven years after then-prime minister Ariel Sharon unveiled his Gaza disengagement plan at the Herzliya Conference, Prime Minister Binyamin Netanyahu took the same podium Wednesday evening and delivered what he said was a call for the engagement of the country with Jewish heritage, Zionism and history. “Here in the land of our fathers, which is also the land of our children and grandchildren, in order to determine our fate we need to strengthen our collective efforts in three primary spheres: security, economy and education,” Netanyahu said.

But before turning to those matters, especially education and linking the youth to Israel’s history, he addressed diplomatic matters, perhaps feeling an obligation to do so because that is generally the subject discussed by prime ministers at the final session of the Herzliya Conference.

“I have reason to hope, realistically, that in the next few weeks we will renew the peace process with the Palestinians, without preconditions,” Netanyahu said. “I have been saying now for a long time that among the international community there is recognition that Israel wants and is prepared to renew the diplomatic process. And once this recognition emerged among the central players in the international community, the practical preparations for this step are also ripening.”

In an apparent reference to “proximity talks,” the idea broached recently by US Middle East envoy George Mitchell whereby talks would begin with him shuttling between the two sides, Netanyahu said that while the customary phrase is “it takes two to tango,” in the Middle East, “sometimes it takes three to tango, or at least to begin to dance. Afterward we will be able to engage in a couple’s dance.”

Netanyahu said that if the Palestinians demonstrated the will not only to build up the Palestinian economy and institutions, but also “peace itself, then we will see the beginning of the process in the coming weeks.”

One senior diplomatic source, however, said it was unlikely that Palestinian Authority President Mahmoud Abbas would renew negotiations until after the next Arab League summit, scheduled for the end of March in Libya. The hope is that this summit would give him the green light to return to talks.

Netanyahu, speaking at the concluding session of the four-day conference, said that Israel would need to continue strengthening the IDF.

“The weak do not survive in the difficult geographic region in which we find ourselves,” he said. “And peace is not made with the weak. I want to make clear that our security needs will increase over the next decade, and in my mind over the next two decades.”

Netanyahu said that Israel’s defense needs required it to have a strong, growing economy. But, he said as a segue to the main part of his address, a strong army and economy were not enough to ensure the country’s existence; it also needed a commitment from the people to be here, and an understanding of why they are here.

And this, he said, depended on education.

The educational basis so important for the country’s strength and existence, he said, was not only math, English and reading comprehension, but also the strengthening and deepening of “all of our connection to each other and this place.”

On Tuesday his youngest son, Avner, won the Jerusalem Regional Bible Quiz for state schools, and will now go on to participate in the National Bible Quiz at the end of the month.

Netanyahu said that the education so critical for the existence of the state starts with the Bible and runs through all of Jewish history up to the Zionist present.

“A nation must know its past to ensure its future,” he said, then adding a quotation from Yigal Alon that a nation that does not know its past will find that neither its present nor future are secure.

“The guarantee for our existence is dependent first and foremost on the knowledge and national consciousness that parents and the educational system impart to our children,” he said.

During an address which prime ministers have used in the past to discuss high policy, Netanyahu quite simply called on the youth, and the nation, to go out, walk the land and discover the country.

He said that in less than a month his government would launch an initiative to restore and preserve historic landmarks, as well as develop two new trails alongside the popular Israel National Hiking Trail (Shvil Yisrael).

One of these new trails will concentrate on historic archeological landmarks, and another will focus on places of historic interest to the “Israeli experience,” – a trail he called a “living Eretz Yisrael museum.”

Preempting questions about why he chose to talk about these matters at the Herzliya Conference, Netanyahu said – to applause – that “sometimes small steps lead to big things.”
Posted by GS Don Morris, Ph.D./Chana Givon at 3:41 PM