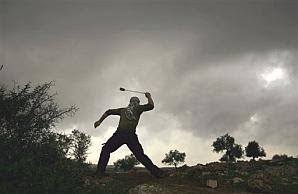 The Palestinian Authority is funding and even participating in violent demonstrations against the construction of the West Bank security barrier, defense officials said on Thursday, warning that if not controlled the protests could escalate into a new wave of a Palestinian resistance.

The IDF has noted a growing presence of PA government officials at the weekly demonstrations north of Modi’in Illit, in Bil’in, Na’alin and near the settlement of Neveh Tzuf (Halamish), where a top PA official was spotted two weeks ago. According to information obtained by Israel, the escalation and funding has been endorsed by the PA’s President Mahmoud Abbas and Prime Minister Salam Fayyad.

“We have reason to believe that the PA is supporting and funding these demonstrations,” one official said. “We are afraid that this will spin out of control.”

IDF sources described the Friday demonstrations as violent, noting that more than 100 Israeli security personnel have been injured in the past two years.

“They throw rocks and sharp objects,” one source said. “Once the demonstrators see that they have the PA’s support, they are encouraged to act violently.”

While the IDF is not concerned that a third intifada will begin – due to the tight grip it has on Palestinian territory and the effective crackdown by PA security forces on Hamas infrastructure – there is concern that the new wave of violence could develop into a new conflict and undermine efforts to restart negotiations. Abbas has in the past publicly endorsed the idea of a popular protest.

“There are about 2,000 people who participate weekly in these demonstrations,” the military source said. “While this is a minute percentage of the Palestinian population in the West Bank, it could grow and undermine all of our efforts to ease restrictions in recent years.”

The IDF is cracking down on the organizers behind the protests and on Thursday morning arrested Muhammad Khatib, a member of the Popular Committee against the Wall from Bil’in and the coordinator of the Popular Struggle Coordination Committee.

IDF sources said that Khatib was arrested because he had failed to sign in every Friday at a nearby police station, as ordered by an Israeli court following an earlier arrest.

Khatib’s arrest, his Web site said, was the most “severe escalation in a recent wave of repression again the Palestinian popular struggle and its leadership.”

Khatib, the site claimed, was the 35th resident of Bil’in to be arrested on suspicions related to the Friday protests.
http://www.jpost.com/Israel/Article.aspx?id=167339
Posted by GS Don Morris, Ph.D./Chana Givon at 8:17 AM