"Jews are the enemies of Allah and humanity" "The Prophet says: 'Kill the Jews'" 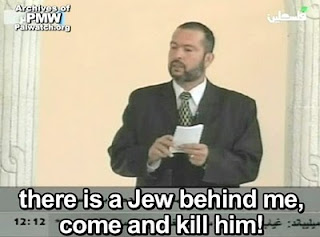 "Even if donkeys would cease to bray, dogs cease to bark,
wolves cease to howl and snakes to bite,
the Jews would not cease to harbor hatred towards Muslims."
http://palwatch.org/main.aspx?fi=157&doc_id=1624

A sermon calling for the genocide of Jews was broadcast Friday by PA TV, which is under the control of PA Chairman Mahmoud Abbas. The speech called the Jews the enemies of God and humanity, and compared Jews to Nazis.

"The loathsome occupation in Palestine - its land and its holy places - by these new Mongols and what they are perpetrating upon this holy, blessed and pure land - killing, assassination, destruction, confiscation, Judaization, harassment and splitting the homeland - are clear proof of [unintelligible word - Ed.] hostility, of incomparable racism, and of Nazism of the 20th century. The Jews, the enemies of Allah and of His Messenger, the enemies of Allah and of His Messenger! Enemies of humanity in general, and of Palestinians in particular - they wage war against us using all kinds of crimes, and as you see - even the mosques are not spared their racism...

"Oh Muslims! The Jews are the Jews. The Jews are the Jews. Even if donkeys would cease to bray, dogs cease to bark, wolves cease to howl and snakes to bite, the Jews would not cease to harbor hatred towards Muslims. The Prophet said that if two Jews would be alone with a Muslim, they would think only of killing him. Oh Muslims! This land will be liberated, these holy places and these mosques will be liberated, only by means of a return to the Quran and when all Muslims will be willing to be Jihad Fighters for the sake of Allah and for the sake of supporting Palestine, the Palestinian people, the Palestinian land, and the holy places in Palestine. The Prophet says: 'You shall fight the Jews and kill them, until the tree and the stone will speak and say: 'Oh Muslim, Oh servant of Allah' - the tree and the stone will not say, 'Oh Arab,' they will say, 'Oh Muslim'. And they will not say, 'Where are the millions?' and will not say, 'Where is the Arab nation?' Rather, they will say, 'Oh Muslim, Oh servant of Allah - there is a Jew behind me, come and kill him.' Except for the Gharqad tree [tree mentioned in the Quran - Ed.], which is the tree of the Jews. Thus, this land will be liberated only by means of Jihad..."
[PA TV (Fatah), Jan. 29, 2010]

Comment: No political correctness here and then of course they know this resonates in their culture and society. Only in the West does PC exist to the detritment of its own civilization.
Posted by GS Don Morris, Ph.D./Chana Givon at 5:58 PM