A Freeze of Jewish Construction in Judea and Samaria 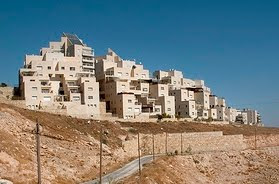 Obama and the Europeans demand a freeze on Jewish construction in the West Bank, in Judea and Samaria. Mahmoud Abbas (aka Abu Mazen) and the Arab League require such a freeze to even consider further negotiations with Israel.
By all means, let’s support a freeze - a comprehensive, simultaneous freeze on all sides. Let us freeze the settlements but also freeze the Arab world’s (including the Palestinian Authority’s) continued rejection of Israel's right to exist as a Jewish state within - at a minimum - the 1967 borders.

Freeze the settlements (located on less than 5% of the West Bank) – Yes! But let's also freeze:
- The hate education in the schools, universities and mosques of Palestine;
- The anti-Semitic propaganda so rife amongst the Muslim world’s media;
- The suicide bombings, and the sanctification of (and even pensions for!) the bombers;
- The continuing rocketry from Gaza into Israel's southern civilian areas;
- The gun smuggling in Gaza, Hamas’ attempts to kidnap more Israelis, and its murder of suspected Palestinian collaborators;
- The expulsions and discrimination against Christians and other minorities in the West Bank and Gaza;
- The continuing disenfranchisement of and economic discrimination against Palestinian refugees by their Arab “brothers” in the countries surrounding Israel;
- The buildup of more than 40,000 rockets in Hezbollah-controlled Southern Lebanon;
- The charters of the PLO, Hamas and Hezbollah, all of which advocate the destruction of Israel and the decimation of its Jewish population.

We could keep freezing many injustices, many absurdities that contribute to the current state of war, to the oppression of much of the populations on all sides. A great idea: let's support a partnership of moderates rather than obstructionists, appeasers and unilateralists. But let's put all in the same pot - let's freeze settlement construction for as long as all parties to peace negotiations do the same and freeze their multitudinous intransigencies.

The day they stop, the day their freeze fails the acid test, the quid-pro-quo - that is the day Israel starts building again.

Let's see who signs on. Let's see who in fact wants real progress, which sides have any sincere interest in peace.