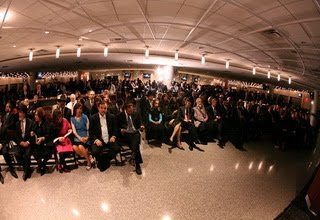 Dinners, as dinners go, can be terribly boring. No, not our evening family meals together, rather the annual fund-raising events hosted by dozens of non-profit organizations. Getting hundreds of people together, providing good food, while honoring a few worthy people or families is a wonderful excuse to ask for money.But, I must say, (even if I'm not, in this case, the most objective person around), that this year's Hebron Fund dinner was far from being boring. To the contrary, it was a wonderfully enjoyable event.

First of all, I must offer much gratitude to Abdalah – New York, for assisting to make this event the success it was. It is no secret that the financial meltdown, together with the Medoff fiasco, has caused many a crisis in numerous organizations. Donations are down and it's not as easy today to get people out to 'dinners' as it once was.

But, we had help. Abdalah-New York decided to actively protest against the New York Mets' decision to rent the Hebron Fund the Ceasar's Club for the dinner. Their protest made the news, and as a result, the Hebron Fund received lots of free publicity, in newspapers and on the internet.

Of course, their protests failed and the event took place as scheduled. I have no doubt that their 'assistance' backfired, bringing out people who might otherwise have stayed home.

I must add that Citi Stadium was a wonderful choice of venue. The hall itself was beautiful, and the other accommodations just right. There was lots of free parking, and the location was about 20 minutes to a half hour from where almost everyone who attended lived, so what could be better than that?! Kudos to the Mets!

The event, was, as earlier stated, not boring at all. The meal was buffet, with a choice of just about anything your heart, or stomach, could desire. Sushi, meat, salads, chicken, you name it and it was there, and it was scrumptious. The hall provided small tables, as well as 'coffee corners' with sofas and chairs, for all those who preferred to sit. Other could wander around, meeting old friends who perhaps they hadn't seen in quite some time. Of course, all attending had at least one thing in common: all were friends and supporters of Hebron!

After about an hour and a half, the official program began. I won't go into all the gory details about the guests-of-honor, except to say that they included: Josh and Sherrie Miller, Bernie and Debbie Thau, Daniel and Tova Lieberman, Rabbi Aaron and Karen Goldscheider, and our own Noam Arnon, who was also awarded this year's Moskowitz Prize for Zionism. Anyone interested in photos and short 'guest-of-honor videos' are invited to peak in at: http://www.hebron.com/english/gallery.php?id=303. Take a look – the videos, or perhaps better put, the people in the videos, are really very inspiring.

The program included some prayers for our soldiers and for Israeli POWS. Participating from Hebron were Avraham Ben Yosef, Noam Arnon, Yoni Bleichbard, Rabbi Simcha Hochbaum, Rabbi Danny Cohen and yours truly. The man who put it all together is Yossi Baumol, Executive Director of Hebron Fund, who worked very very hard to make the evening the success that it was. Many others participated in putting the event together, and if I start naming names, I'll inevitably forget someone, so I'll just add a blanket 'thank you' from all of us here in Hebron to all the wonderful people who invested so much time (and money) to bring the evening to fruition.

So, you might now ask, 'well, it sounds like a fairly normal, 'everyday' kind of fund-raising dinner. What made this one so 'special?'

Very simple. It's not easy to describe in words – I guess you had to have been there – but the atmosphere, the warmth, the electricity present for those few hours, was really unique. I've attended many such events, but don't remember one as pleasant and as memorable as this one. And I have proof: Usually, as dinners draw to and end, not too many people are still hanging around; they've eaten, watched the show, had dessert, paid their donation, and left. But this time around, people were literally requested to leave and were shown to the door, before the witching hour for which we had rented the hall, struck twelve. I don't ever before recall guests being asked to leave.

As I said, a really really enjoyable evening. I can honestly say that anyone not there missed a worthwhile, meaningful and pleasant evening. But don't despair. They'll be another one next year. And whoever would like to still show some tangible support for Hebron can, at: www.hebrontruma.com.

With blessings from Hebron.