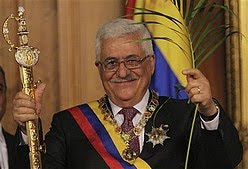 Finally, we know the terms of the US-Israel agreement on freezing construction in West Bank settlements. It is a good plan and represents a considerable, well-crafted, albeit unilateral, concession by Israel. No licenses will be granted or apartments started in the West Bank for the next 10 months. And Israel doesn't consider east Jerusalem to be part of the West Bank. The US government praised the decision; after all it was pretty much what President Barack Obama has been trying to obtain for nine months and has worked hard to negotiate. "We believe the steps announced by the prime minister are significant and could have substantial impact on the ground," said George Mitchell, Obama's Middle East special envoy.

But, of course, it will have no impact whatsoever. On the contrary, the Palestinians and the Arab states will complain that it isn't enough, that it doesn't mean anything, and that they have more demands. Their openly stated demand is that Israel just hand over all the West Bank and east Jerusalem in exchange for nothing.

In giving something in exchange for no material gain or even a gesture from the other side, Israel can only hope that the president appreciates this and remembers that he did not deliver on his promise to get some concession from the Arab side to match it.

But will it be appreciated and even kept by the Obama administration? Will the world give Israel any credit for making one more effort to show that it wants peace? Is it going to be widely understood as demonstrating - unfortunately - that the other side doesn't? Is this going to affect the knee-jerk media view of Prime Minister Binyamin Netanyahu as "hard-line"?

Probably, not but it's worth a try. Obama will be president another three to seven years and he should be shown that Israel wants peace and is willing to cooperate with his efforts to a reasonable extent.

But that's also why there's a time limit. It's not a high price to pay for keeping the US happy and showing Obama that Israel wants peace, is cooperative and is willing to make him look good. Certainly, it won't please the Palestinians.

FOR REASONS different from what you might think, Palestinian Authority leader Mahmoud Abbas is not so happy. He's complained in an interview that Obama is "doing nothing right now" regarding the peace process."I hope he'll take a more important role in the future," Abbas said. The Palestinians "are waiting for the United States to put pressure on Israel so it respects international law, so it takes up the road map... It can do two things: put pressure on the Israelis so they reject settlements, and put pressure so they accept withdrawing to the 1967 borders."

Can you see the humor in this? Here's Obama who campaigned and continues to say that his predecessor was "doing nothing" on the issue and that's why it hadn't been solved. Could Obama have possibly tried harder? He made it his most outspoken issue, talked about it constantly, met with leaders, put forward plans, pressured Israel, reached a deal with Israel that involved considerable Israeli concessions and asked for - but didn't receive - Arab help.

Could the lesson be more obvious? The problem isn't Obama or Netanyahu, it's Abbas. He is the one refusing to negotiate and is making a president who promised talks within two months look bad.

Why is Abbas behaving this way: because he's frustrated that progress isn't being made? This claim is rather ironic since he's the one blocking progress. The real reason is that he wants Obama to get him everything he wants without him making any compromises or concessions.

It isn't going to happen. And the Palestinians, Arabs in general and many Muslims will blame Obama. This must be a shock to him since he'd have tried so hard and bent over backwards to make them happy. And this disrespect is coming from Abbas, leader of the group which Obama has tried hardest to help.

Ironically, too, this is the first real foreign policy success for the Obama administration after 10 months in office. Yet the White House isn't eager - or not likely to be successful - in so claiming since so many people never want to credit Israel's compromises. Once Arab sources criticized Hillary Clinton's enthusiasm, the administration backed down in its praise and looked for still new, albeit small, ways to show that it is tough on Israel.

Objectively, though, bilateral relations are good, due in no small part to this step.

If the Palestinian side was sincere about negotiating and making peace, it would respond rationally.

Okay, they could say, it is only for 10 months but we can use that period to make so much progress that it will be extended. Even better, they could understand that if they made a peace treaty and got a state, there wouldn't be any more settlements in the territory they would be ruling (though there would be on land swapped with Israel).

But, of course, Abbas and the PA don't intend to do anything serious diplomatically in the next 10 months, or 20, or 30. All Abbas wants is that the United States force Israel to "accept withdrawing to the 1967 borders" and give up demands for settling Palestinians only in Palestine, not Israel.

Let's all watch, see and draw appropriate conclusion about what actually happens. And for those who didn't learn this lesson the last half-dozen times - most importantly from the fate of the 1990s' peace process, Israel's withdrawal from south Lebanon, Israel's withdrawal from the Gaza Strip - this can be a less costly way of understanding that it is the Palestinian side that is blocking peace and that support for Israel is the proper response to this situation.
This article can also be read at http://www.jpost.com /servlet/Satellite?cid=1259243034176&pagename=JPArticle%2FShowFull
Posted by GS Don Morris, Ph.D./Chana Givon at 3:21 PM