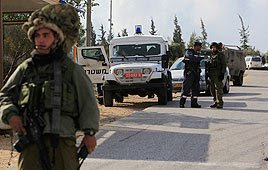 The defense establishment is monitoring the rise in the number of terror attacks taking place in the Gaza Strip, West Bank and Jerusalem in the past few weeks, and security officials admit that although there is no common denominator or "guiding hand", this trend must be addressed with extra caution in order to be prepared for more radical developments. A defense official told Ynet on Saturday night, "We see many actions in the outline of 'popular terror', which are seemingly insignificant, but this situation may point to distress and frustration among the Palestinians, and we must ensure constantly that things do not develop in undesired directions."

According to the source, a distinction must be made between the hundreds of acts of terror which took place during Operation Cast Lead in the Gaza Strip and the reality after the Israeli offensive.


Data collected by the defense establishment show that 50 terror attacks of various types were counted in January. February saw 124 terror attacks take place, including the firing of rockets from the Gaza Strip, while March saw 132 such incidents.


A slight increase in the number of incidents has been recorded compared to previous years, but the IDF is particularly examining the sequence.

In terms of the Gaza Strip, military officials say, Hamas is not acting very effectively these days, with one of the reasons for this being the results of Operation Cast Lead. However, the Palestinian organization is engaged in renewing its power, both in terms of activists and by stockpiling weapons.

The Israel Defense Forces is cautiously examining the situation in the West Bank in light of the fact that the many incidents which took place there are unlinked to each other and are not executed following instructions issued by a "guiding hand".


"We are well familiar with the popular terror, from previous years as well. It mostly constitutes a high percentage of all the incidents in the entire region. Although these are not major incidents, we must constantly examine what motivates what is happening," the source explained.


The defense official added that "it's too early to reach conclusions on what has happened in recent weeks, but we can definitely say that terror activists are waking up, not necessarily the senior ones and not necessarily incidents which were planned in an organized manner."

IDF officials note that the current wave of attacks may end soon, but are also preparing for an escalation, particularly in light of the fact that such acts of terror are more difficult to thwart, as they are mostly the result of a spontaneous organization by assailants acting alone.


"Our main goal is to prevent escalation," added the source. "Any incident may lead to additional incidents, which may be followed by an escalation, and therefore were examining this situation with extra caution."

Thanks YNET News
Posted by GS Don Morris, Ph.D./Chana Givon at 9:01 AM