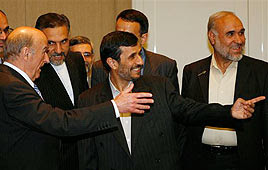 'Our participation would have involved putting our imprimatur on something we just didn't believe in,' says US president of decision to shun UN racism summit. Germany, Sweden also pull out. Swiss president, meanwhile, has dinner with Durban keynote speaker, Iranian President Ahmadinejad

The United Nations opens its first global racism conference in eight years on Monday with the US and at least five other countries boycotting the event out of concern that Islamic countries will demand that in denounce Israel and ban criticism of Islam. The administration of President Barack Obama announced Saturday that it would boycott "with regret" the weeklong meeting in Geneva, which already is experiencing much of the bickering and political infighting that marred the 2001 conference in Durban, South Africa.

The Netherlands and Germany declared their boycott Sunday, while Australia, Canada, Israel and Italy already have said they would not attend.

"I would love to be involved in a useful conference that addressed continuing issues of racism and discrimination around the globe," Obama said in Trinidad on Sunday after attending the Summit of the Americas.


But he said the language of the UN's draft declaration "raised a whole set of objectionable provisions" and risked a reprise Durban, "which became a session through which folks expressed antagonism toward Israel in ways that were often times completely hypocritical and counterproductive."


"We expressed in the run-up to this conference our concerns that if you adopted all of the language from 2001, that's not something we can sign up for," Obama said.


"Our participation would have involved putting our imprimatur on something we just didn't believe in."


UN: Shocked by US decision

Some European countries are still deciding whether to attend the UN conference.

Germany's government says it was concerned the venue could be "abused as a platform for other interests." German Foreign Minister Frank-Walter Steinmeier said Sunday that he made the decision after consulting with other European Union nations, and he urged those attending the conference to "stand up for the effective fight against racism and ethnic discrimination."

Britain said it will send diplomats, despite concerns the meeting could become a forum for Holocaust denial or anti-Semitic attacks.

At the Vatican, Pope Benedict XVI said the conference is needed to eliminate racial intolerance around the world.

A British Foreign Office spokesman said Britain doesn't want to see countries such as Iran debating about whether the Holocaust occurred.

The pullout of Germany would be significant as it has played a leading role in UN anti-racism efforts as a result of its troubled historical legacy. In recent meetings, it has expressed dismay about some governments' attempts to downplay the significance of the Holocaust.'


"I am shocked and deeply disappointed by the United States' decision not to attend," said UN human rights chief Navi Pillay, who is hosting the conference. She conceded some countries were focusing solely on one or two issues to the detriment of the fight against intolerance, but said it is essential that the issue of racism be tackled globally.


The major sticking points regarding the proposed final UN declaration are its implied criticism of Israel and an attempt by Muslim governments to ban all criticism of Islam, Sharia law, the prophet Muhammad and other tenets of their faith.

A number of historical dates coincide with the conference, which is supposed to examine the various manifestations of racism, intolerance, discrimination and xenophobia around the world.

Tuesday marks this year's day for Holocaust Remembrance, while Monday's opening of the conference falls on the birthday of Nazi Germany's leader Adolf Hitler.

Iranian President Mahmoud Ahmadinejad is slated to speak on the first day. He and Swiss President Hans-Rudolf Merz met on Sunday to discuss diplomatic issues including an eight-year jail sentence for a US-Iranian journalist convicted in Iran of spying.

The meeting focused mainly on "questions related to collaboration in the energy and economic sectors",the Swiss government said in a statement after they met at a Geneva hotel.

Switzerland has been representing US interests in Iran since 1980, because Washington has no direct diplomatic relations with the Islamic Republic.

"Within the scope of this mandate undertaken by Switzerland as a protecting power, various unresolved cases of consular protection were discussed, including the sentencing of the American-Iranian journalist Roxana Saberi," the Swiss statement read. A spokeswoman declined to offer more details.

Israeli Deputy Foreign Minister Danny Ayalon expressed dismay about the Swiss-Iranian meeting, which he said "only harms and undermines the dignity of the one setting up the meeting".

The Associated Press and Reuters contributed to this report

thanks YNET News
Posted by GS Don Morris, Ph.D./Chana Givon at 8:10 AM