should American Jews be worried yet‏ 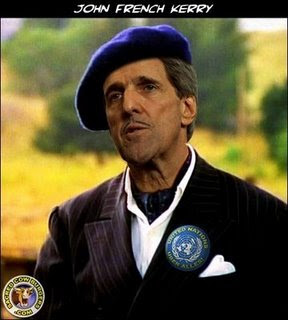 Why is John Kerry In Gaza?

In 2006 there was a Hamas attack on an American diplomatic convoy in Gaza. Since then the rule has been, US Government personnel were to avoid the Gaza Strip because there was no way to guarantee their safety without strong coordination with the terrorist group Hamas and the terrorist enablers UNRWA. For years, the UN has been sitting on it's "petards" trying to define terrorism so it can be called a crime against humanity. What the United Nations has been missing this whole time is all they had to do is click their heels together three times and say, "there's no place like home," because one of their own organizations, the United Nations Relief and Works Agency (UNRWA) is a classic example of a terrorist operation. The UNRWA is a self-perpetuating bureaucracy, and like all self-perpetuating bureaucracies, their mission is to maintain the status quo. The status quo in their case means preventing peace.The Agency was founded to help the Palestinian refugees (yep its just for them) improve their lives, but it acts a s a recruitment, promotion and planning arm of the terrorist organizations:

Fred Gottheil of the University of Illinois at Urbana-Champaign characterizes this as UNRWA's "moral hazard" saying that UNRWA works to perpetuate the Refugee problem:

"the result was the creation of a perverse set of incentives among refugees that discouraged many from pursuing viable options to their long-term refugee status. It also encouraged many non-refugees in the region to attempt to register for refugee status or at least to take advantage of the entitlements UNRWA offered. Finally, UNRWA's half-century tenure as a caretaker agency helped create a relatively large and influential bureaucracy that, as stakeholders in the provision of entitlements, pursued self-serving agendas that tended to perpetuate the Palestinian refugee condition rather than its resolution...." In short, the system encouraged refugees to remain that way forever rather than to shed that status. As such UNRWA fits this rubric because of how it works in tandem with Palestinian society, which would also provide pressures to ensure those so defined remained permanently as disadvantaged refugees.

The UNRWA is Structured in a way that will enable the UN's Arab countries to use it as a political tool:

This is reinforced by the fact that, structurally speaking, the Commissioner of UNRWA works in an exceedingly political stage while receiving little if any guidance from the Advisory Commission or the General Assembly. As Edward Buehrig writes, "paradoxically, because of the highly political context in which UNRWA operates, the Commissioner General receives little guidance from either the Advisory Commission or the General Assembly. This leaves to him and aides the major burden of political determination. This freedom is what enables the Commissioner the ultimate autonomy to push whatever political agenda he/she desires or, perhaps more accurately, to accede to the non-UN pressures of Arab states or radical Palestinian groups."(Buehrig, Edward H. The UN and the Palestinian Refugees, Bloomington: Indiana University Press, 1971, P. 57)

Today Senator John "Why the Long Face" Kerry, along with Congressmen Keith Ellison and Brian Baird are touring Gaza. They are being led around by UNRWA and their security is arraigned by Hamas, one thing is certain they are getting a skewed version of last month's events in Gaza.

The question is does this signal a change in American policy toward Israel and Terrorists? After all Kerry is the chairman of the Senate Foreign Relations Committee:
Congressional ban on members visiting Gaza under the bus Ed Lasky
Since Hamas took over control of Gaza and started launching missiles into Israel, there has been an unofficial halt to Congressional visits to Gaza ..

Hamas, lest we forget, has in their Charter the pledge to kill Jews wherever they may live. Nevertheless, now there appears to be a change to that Congressional rule. Two Democratic Congressmen are visiting Gaza now; and John Kerry, chairman of the Senate Foreign Relations Committee, has also crossed the border into Hamas-controlled Gaza.

Baird had this to say of his visit:

Baird said that the visit represents a change in the United States' attitude and approach to Gaza, under newly elected President Barack Obama.

The destruction from Israel's recent military operation in Gaza was beyond description.

Kerry has not issued comments so far. He is being escorted through Gaza by officials from the United Nations Relief and Works Agency-a group that has been harshly critical of Israel, that has had terrorists on its staff and, that has allowed use of its facilities by terrorists. All on our dime.

Kerry is most assuredly getting an earful.

Baird is not speaking for the Administration. Nor is Ellison. Nor are any of the politicians meeting with Hamas officials (at least, “officially”). And with Europea n politicians also speaking with Hamas, it may not seem like much. Nevertheless, the breaking of the de facto ban on Members of Congress visiting Gaza is telling.

Comment: Asleep at the Wheel should only be the name of a Country group-it should not reflect the attention of American Jews!
Posted by GS Don Morris, Ph.D./Chana Givon at 12:07 AM