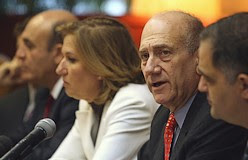 Israel will not accept a cease-fire in the Gaza Strip before Gilad Schalit is released, the security cabinet decided unanimously Wednesday, after discussing the issue for several hours.

In doing so, the cabinet accepted the position of Prime Minister Ehud Olmert. The cabinet also decided that while Gaza crossings would continue to facilitate the passage of vital humanitarian supplies for residents of the Strip, any further opening of the crossings was dependent on Schalit's release.

During the meeting, Olmert said that accusations Israel was pulling out of a finalized cease-fire agreement were baseless.

"We didn't give Egypt any agreement or framework for a deal from which we have suddenly withdrawn," he said. "I understand that there is some debate now over the goals of [Operation Cast Lead], but a [cease-fire] deal was not one of them. All along, Foreign Minister Tzipi Livni was adamant in her objection to any talk of a deal. I supported reaching understandings with the Egyptians."

While Olmert stressed that the decision did not mean Israel wanted a dispute with the Egyptians, he said that "we need to protect our interests."

Olmert read out a number of quotes from a document agreed upon with the Egyptians in June 2008 regarding the last cease-fire. One of these was a statement that without Schalit's release, a truce with Hamas could not be maintained.

"We said this unequivocally and it was clear to our Egyptian partners," he said. "There is no reason for Israel to act now as though it has lost every shred of self-respect, and submit to Hamas's terms."

On Tuesday, Olmert signaled that the negotiation process was still far from complete, saying it should be concluded in a "short period," but leaving open the possibility that a deal might not be finalized until after he left office.

"One thing is clear, the foundations that we set [for Schalit's release] - even if they are not completed during my tenure - will make it possible to return him immediately afterward," Olmert said during on a tour of the Western Wall and nearby archaeological sites.

Damascus-based Hamas leader Khaled Mashaal has indicated that Hamas would not accept linking Schalit's release to the cease-fire deal.

"Israel is responsible for blocking Egypt's efforts to broker a [Gaza] truce by adding a new condition at the last minute," AFP quoted him as saying.

"A truce can come about only in exchange for a lifting of the blockade and the reopening of the crossing points. It is unacceptable to combine the truce issue with the question of Israeli prisoner Gilad Schalit," he said.

Earlier Tuesday, however, the London-based Arabic daily Al-Hayat quoted a senior official in the organization as saying that Hamas had no objection to the demand that a deal on Schalit's release be finalized before a cease-fire agreement, as long as Israel releases all of the prisoners on Hamas's list.

Cairo had been anticipating a decision from the security cabinet Wednesday that would enable a cease-fire agreement, an Egyptian Foreign Ministry spokesman said on Tuesday.
This article can also be read at http://www.jpost.com /servlet/Satellite?cid=1233304816185&pagename=JPArticle%2FShowFull
Posted by GS Don Morris, Ph.D./Chana Givon at 4:14 PM