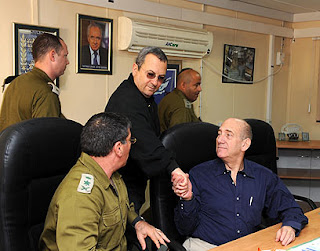 Prime minister tours Gaza Division headquarters with defense minister in tow, both pledge that while Israel is keen on maintaining current ceasefire army is prepared to act against any perceived threat
Roni Sofer

Although the shaky ceasefire with Gaza's armed groups has so far not collapsed despite repeated violations by Hamas, Prime Minister Ehud Olmert on Tuesday warned residents of communities in southern Israel to brace for a possible escalation of the hostilities "The situation between us and Hamas is one of an inevitable clash. It's only a question of 'when,' not 'if.' And if we need to fight Hamas – then that is what we'll do. In any event we must be alert and prepared," Olmert said during a visit to the Gaza Division's headquarters.


Officers briefed the prime minister on the army's current undertakings in the region and the state of the armed groups in Gaza at present time – particularly Hamas. The briefing also touched on the security situation on Israel's border with Egypt.


Barak added on Olmert's comments that while Israel "has no intentions of disrupting the calm, we have an interest in maintaining it, but in a situation where we must thwart an attack against IDF troops or Israeli citizens, we will act."


He stressed that the army has been ordered to prepare for any scenario. "We look at the relative calm here but know that underneath the surface something different is happening," he said.


Olmert later met with paratroopers deployed along the Gaza border, and Barak wished the military personnel accompanying the entourage success with their operations in the region.