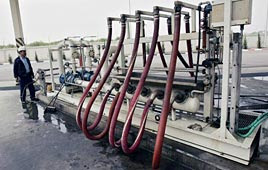 Gaza residents are experiencing sporadic electricity blackouts, and Palestinian officials are blaming Israel for cutting off fuel shipments to their power plant. Israeli military administration spokesman Peter Lerner says the Palestinians warned their Gaza City electricity plant would run out of fuel Monday if shipments aren't resumed. He said the shipments were stopped last Wednesday because of Palestinian rocket attacks.


Kanan Obeid, chairman of Gaza’s Hamas-run Energy Authority, also said the Strip would be plunged into total darkness unless the fuel shipments are resumed.

According to him, one of the power plant's turbines has already been deemed inoperative, and the remaining turbines will stop functioning on Monday.


Obeid said there was no foreseeable solution to the fuel shortage, adding that Israel's policy was aimed at shutting the power plant down.


The Israeli Defense Ministry said Sunday no decision has been made about renewing the fuel supplies. The Gaza City plant provides about a quarter of Gaza's electricity. Most of the rest comes directly over lines from Israel. Egypt also provides a small amount.