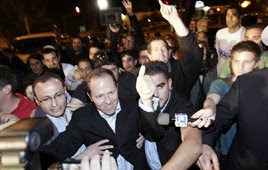 Secular candidate defeats ultra-Orthodox opponent Meir Porush by 9% margin, launches festivities when preliminary results put him in lead. 'As of this morning I am mayor of all Jerusalemites,' he announces in early victory speech
Ronen Medzini

Jerusalem's secular mayoral candidate, Nir Barkat, won the municipal election Wednesday with 52% of votes. His ultra-Orthodox opponent, Meir Porush, was close behind with 43%. The results were officially declared after 703 of the 707 ballots had been counted. Billionaire Arcadi Gaydamak got 3.6% of votes and the lesser known Ale Yarok (Green Leaf Party) candidate Dan Biron emerged with less than one percent.

Barkat kicked off a victory celebration at his campaign headquarters early, after just 440 ballots had been counted, and showed him as leading with 53% of votes, while Porush lagged behind with 39%.

"Victory belongs to all those who love and cherish this special and amazing city of ours, the Jewish people's eternal capital. It belongs to the Right and the Left, it belongs to the religious and the secular."

Barkat called on the city's residents to unite. "As of this morning I am mayor of all Jerusalemites. I want to offer praise to Meir Porush and his supporters, and the public they represent," Barkat said. He concluded his speech with a blow on a shofar (ceremonial ram's horn) and the singing on the national anthem.

While Barkat's supporters erupted in cheers egging on a secular revolution after the first votes were counted, Porush's camp accepted the preliminary results with a grim disappointment.

A large number of Porush's campaign workers began to make their way home in the early morning hours, and a gathering of ultra-Orthodox youths loitering outside of Barkat's headquarters began a small-scale riot.