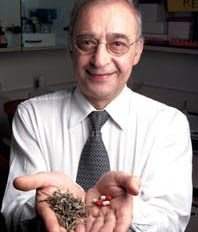 New findings show a drug developed by Israel's pharma giant Teva Pharmaceutical Industries to treat the symptoms of Parkinson's disease, has been proven to slow the progression of the illness. Patients who took Teva's Azilect 1mg pill once a day at the start of a late-stage Phase III 18-month trial showed "significant improvement" over patients who began taking the pill nine months later, Petah Tikva based Teva announced in a statement yesterday.

In the early part of the trial, called Adagio, patients experienced slower disease progression and in the last part, saw a steadying of symptoms. They also experienced a smaller decrease in baseline function, Teva announced.

Nearly one million people in the US, and four million worldwide suffer from Parkinson's, a progressive neurodegenerative condition that destroys a patient's nerve functions. The chronic disease occurs when a group of cells in the brain responsible for producing the hormone dopamine, begin to die.

Dopamine is a neurotransmitter that sends information to the parts of the brain that control movement and coordination. When levels of dopamine decrease it affects the way a person can control movement leading to tremors, difficulty in speaking and walking, posture problems and depression.

Azilect is a joint development by Teva and two professors from the Technion-Israel Institute of Technology ? Prof. Moussa Youdim, who began work on the drug in the 1970s, and Prof. John Finberg. The once-a-day pill was approved as a treatment for Parkinson's in 2005.

It inhibits the production of the enzyme that destroys dopamine, thereby increasing levels of the hormone in the brain. It often prescribed in combination with levodopa, a drug which converts into dopamine in the body.

Teva claims that Azilect, which is known as rasagiline in its generic form, is the first drug on the market to slow the progression of Parkinson's.

"Delaying disease progression is the most important unmet need in the management of Parkinson's disease," stated Prof. C. Warren Olanow, professor and chairman of the department of neurology at the Mount Sinai School of Medicine in New York, and Adagio co-principal investigator.

"Results of the study show that early treatment with once-daily rasagiline 1mg tablets provided significant clinical benefits that were not obtained by those patients where initiation of Azilect therapy was delayed by nine months," he continued.

"Its fantastic that we have developed this in Israel in a small laboratory - that we have competed with major drug companies, and have beaten them at their own game," Youdim told ISRAEL21c in an interview in 2006.

The Teva Azilect trial was one of the largest studies conducted on Parkinson's, and included 1,176 patients with early-stage symptoms at 129 medical centers in 14 countries around the world. The results were presented at the 12th congress of the
European Federation of Neurological Societies in Madrid.

Sales of the medicine are expected to leap dramatically in the wake of this news, with Teva anticipating a rise to sales of at least $1 billion a year. Total sales of drugs for Parkinson's worldwide stands at $33.7 billion annually. Teva hopes US and European regulators to expand the official labeling of Azilect's approved uses.