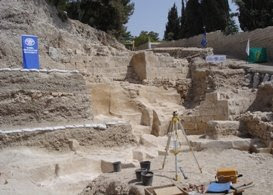 The excavations, which are being conducted by the Israel Antiquities Authority, a governmental body, are not open to the public. Journalists were given a look at the site for the first time on Wednesday.

Located on the biblical Mount Zion are the remains a 10-foot tower that was part of the outer wall of Jerusalem from the Second Temple period, which includes the time when Jesus was in Jerusalem, until the Romans captured and destroyed the Second Jewish Temple and Jerusalem in 70 A.D.


Above it, following a similar line, are the remains of the wall that surrounded Jerusalem from the Byzantine Period (324-660 A.D.), when Byzantine Christians ruled the city.

IAA archeologist Yehiel Zelinger, who is directing the excavation, said both walls were part of the city when Jerusalem had reached its largest size – which was about two times the size of today's walled Old City.

"In the Second Temple period, the city, with the Temple at its center, was a focal point for Jewish pilgrimage from all over the ancient world," Zelinger said. In the Byzantine period it attracted Christian pilgrims who came to follow in the footsteps of Jesus, he said.

The exposure of the two walls, the second of which was built 400 years after the first in the same location, "prove that this is [the] most advantageous topographic location for the defense of the city," said Zelinger.

The lines of the wall that delineate Mount Zion on the southern and western sides were first discovered and excavated by the British Palestine Exploration Fund. But the archeologists used excavation shafts and subterranean tunnels so the walls were never actually exposed.


When Zelinger and his team began excavating the area a year and a half ago, they found a number of "souvenirs" left behind from that first archeological expedition, including a 110-year-old shoe and beer and wine bottles from that era.

The IAA has dozens of archeological excavations in Jerusalem and throughout Israel, a spokeswoman said.

IAA archeologist Jon Seligman said eventually, the excavations here will be included in a planned promenade for tourists that will go around Mt. Zion all the way to the Dung Gate in the current Old City walls, which is just outside the Western Wall plaza and Temple Mount.

Visitors will be able to walk along the path and see the ancient walls of Jerusalem on one side and the Hinnom Valley and present day Jerusalem on the other, Seligman told CNSNews.com.