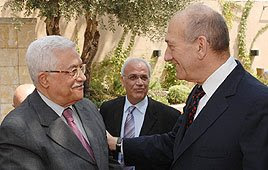 Prime Minister Ehud Olmert reprimanded Palestinian leader Mahmoud Abbas Sunday for meeting with released murderer Samir Kuntar in Lebanon. "You're not supposed to meet with killers," Olmert said during a meeting between the two in Jerusalem.


"To this day we had three prisoner-release waves that we declared in advance, yet this time we are saying that there is no pledge to release more prisoners," an Olmert associate said.


Addressing earlier reports that the PM intended to press Abbas to reach an agreement within two weeks, a senior PM's Office official said they were unfounded.


"It never happened," the source said. "The prime minister is committed to the Annapolis understandings, that is, a comprehensive agreement by the end of 2008. Nothing else is acceptable or being discussed."

Meanwhile, Palestinian negotiator Saeb Erekat also said there was no intention to reach a shelf agreement within weeks. "We seek to reach a comprehensive agreement," he said in a press conference in Ramallah.


Erekat added that there will be no negotiations without a solution for the Jerusalem question, the refugee issue, and the question of borders.


Ali Waked contributed to the report
Posted by GS Don Morris, Ph.D./Chana Givon at 7:20 AM