Olmert Has Given 'Abbas Plan for 93% of West Bank 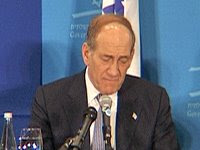 News and Analysis] The Israeli daily Haaretz is reporting that Israeli Prime Minister Ehud Olmert has given Palestinian Authority Chairman Mahmoud 'Abbas a plan that would see Israel evacuate 93 percent of post-1967 territory; cede Israeli land to the Palestinians in order to make up the difference; and create a free-passage route between the West Bank and the Gaza Strip. Under the plan, Israel would retain 7% of the post-1967 territory – land upon which major communities have been built since then. According to Olmert, the border would be essentially the same as Israel's controversial security buffer – a charge frequently made by Palestinians and rejected by Israel. The Olmert plan rejects a Palestinian "right of return" for families who left their homes in what became the state of Israel in 1948 – an issue many Palestinians have insisted is non-negotiable. 'Abbas adviser and spokesman Nabil Abu Rudeina told The Media Line that the plan is not new and that the impression that it was just now submitted by Olmert to 'Abbas is misleading. He said it's been on the table for several weeks. Abu Rudeina said the plan remains unacceptable to the Palestinians, citing what he claims are Israeli deviations in issues already agreed upon within the context of the Road Map peace plan and Annapolis understandings. These include the need for parity in "size and quality" in any land swap and a return to the pre-1967 borders. Abu Rudeina charged that re-asserting the Olmert plan at this time "shows that Israel is still not serious about the peace process." Analysts at The Media Line caution that rather than focusing on point-counterpoint between the sides, notice two events should be viewed in concert: the Olmert plan's re-assertion immediately after Palestinian Chief Negotiator Ahmad Qurei's weekend threat that the Palestinians would shift position and call for a one-state solution if Israel doesn't cooperate. Analysts suggest there is more coordination than is at first apparent.