Dividing Jerusalem? Been There, Done That. 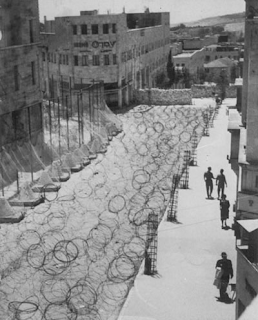 (IsraelNN.com) Been there, done that.

Recently, our leaders, with the guidance of the Bush administration, the International Community and their vision of a 'New Middle East' through the Road Map, have been bandying about with the bright new idea that a divided Jerusalem would bring peace and security to its Jewish inhabitants from Arab terror. See PM Olmert's latest statement to the People of Israel:

Olmert: Undivided Jerusalem Means More Terrorism Prime Minister Ehud Olmert maintained Monday that retaining Jerusalem as the undivided capital of Israel would lead to more terrorism. "Whoever thinks it is possible to live with 270,000 Arabs in Jerusalem must take into account that there will be more bulldozers, more tractors, and more cars carrying out attacks," he said. Three eastern Jerusalem Arabs carried out terrorist attacks in the capital this year; two of them used a bulldozer and a tractor. The only problem is that it's been done before. Jerusalem WAS divided back from 1949-1967, and there was no peace, no quiet, no security for the Jerusalem residents near its border.

They say that a picture is worth a thousand words. Please view below these photos, which anyone can find on the internet, and see what Jerusalem looked like when she was cut in two with ugly barbed wire fences. Take a look at the buildings in Jerusalem that were under constant sniper fire from the Arab side. Imagine how it must have been to try to get from one part of the city to another when it was divided and no Israeli security was able to neutralize the Arab snipers.

Tall fence (far left) with barbed wire. Jerusalem cordoned off by the British (before 1949).

Moshe Dayan walks through the newly liberated part of the eastern section of Jerusalem, 1967.

The wall that once divided Jerusalem. Photo from Reuters.

(Above) Shot up and pock-holed Jewish building on the periphery of Jerusalem by Arabs from the other side of the border fence.

If we fell for this 'new' old idea of dividing the city and ceding land, would we once again see ourselves taking positions like these in Jerusalem? Will Jerusalem once again look like this?

The future, according to our prophets, promises a united Israel, peace, and the building of the Third Temple, which will be in the eastern part of the city. The Road Map and any plans to re-divide Jerusalem is counter to that lofty goal. Somehow, people today forget why those of us who were exiled have been brought back to Israel. Re-dividing Jerusalem is a formula that will not work. Mr Olmert, Mr Bush, TEAR DOWN THIS WALL you are building.

Fighters of the past who died to liberate and re-unite Jerusalem, thanks, but no thanks. Bush & Olmert want to give it away to our enemies. - Oh, and you can cancel the holiday that celebrates the re-unification of the city called 'Jerusalem Day'. It will be redundant. How can we celebrate a liberation and re-unification when we have given it away?

So, the next time you hear anyone speak about dividing Jerusalem, just tell them, 'Been there, done that, and it didn't work."