This war may have prevented a huge planned terror attack

Elder of Ziyon
I've been seeing unsourced rumors like this one (via email):

From the 48 Hamas prisoners that have been captured, the intelligence have been interrogating them and the most terrifying, and horrific picture is being built.

They are being investigated about the many tunnels that have been found and dug under many kibbutzim that surround Gaza. The most terrifying detail is being uncovered that Hamas had a plan to attack all the settlements and kibbutzim in the area this year on Rosh Hashanah with an invasion of over 200 terrorists into almost all the settlements in the area. The tunnels went under the kibbutzim under the kindergartens and dining rooms and other areas within the kibbutz perimeters. They planned to occupy the whole area and kill as many Israelis as possible.

This could have been the worst terror attack in the history of terrorism. Thousands of people, including women and children would have been slaughtered in this planned attack.

Could this be true?

According to NRG, Bibi said something like this in a cabinet meeting yesterday, although without some of the more specific details like the "Rosh Hashahah" timeframe::

Prime Minister Benjamin Netanyahu revealed yesterday (Thursday) that the intent of the organization (Hamas) was to use dozens of tunnels simultaneously.

In the cabinet meeting, Netanyahu told ministers that "these tunnels were meant to allow the enemy to attack simultaneously and perform mass attacks on Israeli citizens."

Security sources stress that if the political leadership wants to eliminate the problem of the tunnels, the IDF needed more time because we are not even halfway done. They say this unplanned war with Hamas prevented a disaster on the order of the Yom Kippur War, which would reduce the State of Israel to its knees.

(UPDATE: A later article did mention the Rosh Hashanah scenario.)

Bibi also alluded to such a mass attack in a speech a few days ago:


"More tunnels were discovered during last night's action, tunnels that are added to the many others we have found, some of which had already reached Israeli territory. Hamas invested years of work and vast capital in them in order to perpetrate large-scale terrorist attacks and carry out abductions. We found handcuffs and sedatives. There is no question here. This was a strategic network for Hamas in which it had installed fortifications, electricity, cables, all in order to infiltrate, carry out large-scale attacks and kidnap [Israelis]."

We do know that there were several tunnels into Israel that were in close proximity to Israeli communities, or on their way, possibly with multiple exits on the Israel side that would facilitate such an attack: 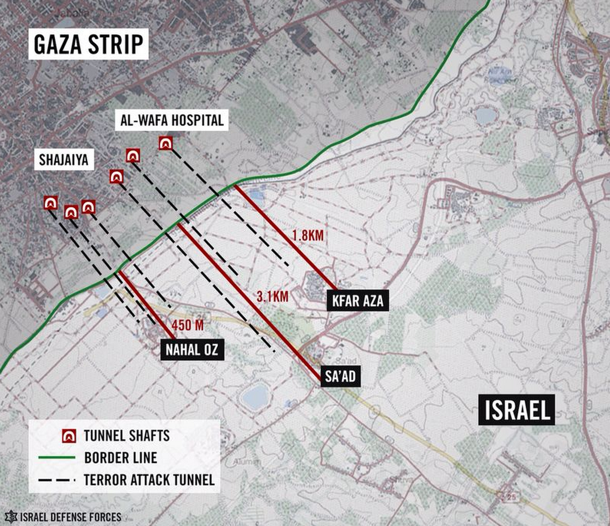 The size (both length and height/width) and sophistication of the tunnels suggest a larger operation than just snatching a person.

The idea of simultaneous attacks by Islamists against civilians is not exactly novel.