Bennett: 'Who's Conducting a Disproportionate War?'

In an interview on Sky News, Economics Minister Naftali Bennett gave an interviewer a lesson in what Israelis have been experiencing. 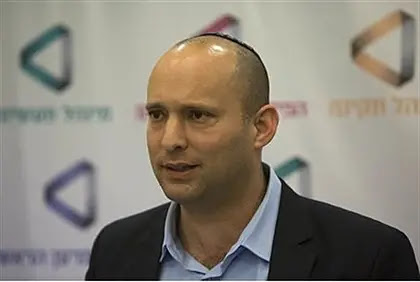 Naftali Bennett
Flash 90
In an interview on Sky News, Economics Minister Naftali Bennett was forced into a confrontation with the news correspondent interviewing him. The correspondent attempted to goad Bennett into admitting that the IDF's military campaign in Gaza was “disproportionate” and “was targeting women and children.”
Bennett has been making the rounds of international news outlets in recent days, explaining Israel's position and discussing how Hamas was turning Gaza residents into human shields. The interview on Sky News was supposed to follow the same pattern, but the extremely hostile attitude of the interviewer drove Bennett to toughen his stance – and presentation.

Already at the outset of the interview, the stage was set for a confrontation, as the correspondent asked Bennett that even though Israel had a right to defend itself, was not Israel's reaction “disproportionate?” After all, over 300 Gazans had been killed, many of them civilians, while there have been very few Israeli casualties.
In response, Bennett asked “Are you kidding me? If thousands of rockets were fired at your home and family, as happened this morning to me, would you talk about proportion? The only difference between us and Hamas in Gaza is that they send their women and children to stand next to the missile launchers in order to get them murdered, so they can scream to the world about the murder. It's cynical and cowardly. Your question is out of place, because Israel has a right to defend itself,” Bennett said, adding "Your question is not appropriate."
The interviewer, insisting that Israel was the aggressor and hinting that Hamas did not use Gazans as human shields, was again answered sharply by Bennett. “You are invited to come and live under the circumstances we live under. How easy it is to sit on the side and tell us how to respond as they target us for no good reason. They have no territorial claim on us, we pulled back to the 1967 lines 9 years ago. They are firing at us and we are responding with war. Sometimes in war you have casualties. I am not going to apologize for defending my four children from the missiles they are firing at my home in Raanana,” said Bennett.
Not satisfied with this, the interviewer told Bennett that it was unfair that he gets to walk around in a short-sleeved shirt, while Gazans, in order to survive, needed helmets and flak jackets. To this Bennett responded “is it my fault that we invest millions in the defense of our people while they invest millions in missile launchers to destroy us? Israel defends its people, while Hamas' goal is to kill as many Jews as possible. I say we have the right to live here, and that right means that if someone shoots at you, you shoot back at that person, and if that person cynically surrounds himself with women and children, he is responsible for the tragedy.”