US Secretary of State: I have never said Israel is an apartheid state; despite Kerry's virtually flawless record in support of Israel, a tape released on Sunday night led to widespread outrage in Jewish community. 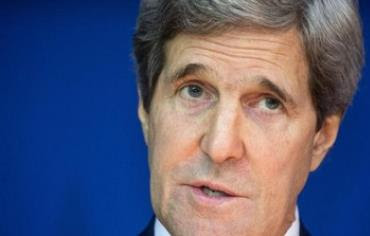 John Kerry Photo: REUTERS
WASHINGTON -- US Secretary of State John Kerry issued a forceful statement on Monday night responding to fallout from his use of the term 'apartheid' to characterize a potential future Israeli political reality, should a two-state solution with the Palestinians fail to come to pass.
"I will not allow my commitment to Israel to be questioned by anyone, particularly for partisan, political purposes," Kerry said in the statement, issued by the State Department. "I do not believe, nor have I ever stated, publicly or privately, that Israel is an apartheid state or that it intends to become one."

"I have been around long enough to also know the power of words to create a misimpression, even when unintentional, and if I could rewind the tape, I would have chosen a different word," Kerry added.

Kerry has prioritized peace between Israel and the Palestinians above all else as secretary of state, traveling to the region more than anywhere in the world since assuming office last spring.
During his three-decade tenure in the United States Senate, as well, Kerry had a virtually flawless voting record in support of Israel and its security, according to pro-Israel watchdog groups.
Nevertheless, a tape released on Sunday night led to widespread outrage amongst members of the Jewish community, both in the US and in the Israeli Knesset, in which he warns Israel of a perceived demographic inevitability: a Jewish minority ruling over a majority of Israeli Arabs and Palestinians.
"A unitary state winds up either being an apartheid state with second-class citizens— or it ends up being a state that destroys the capacity of Israel to be a Jewish state," Kerry told the Trilateral Commission at an off-the-record event last week.
The nation's top diplomat suggested the quote had been spread for political purposes— right-wing outlets Fox News and the Drudge Report led with the news story on Monday, and the Daily Beast, which first acquired the tape, may have acquired the tape surreptitiously, without an invitation to the commission's event.
But Kerry acknowledged the use of the term "apartheid," which carries political weight given its roots in South African institutionalized discrimination. He also defended his pursuit of Middle East peace as the only way to ensure Israel remains both Jewish and democratic.
"In the long term, a unitary, binational state cannot be the democratic Jewish state that Israel deserves or the prosperous state with full rights that the Palestinian people deserve," Kerry said. "That’s what I said, and it’s also what Prime Minister Netanyahu has said."
The American Israel Public Affairs Committee, American Jewish Committee, B'nai B'rith International and several other major American Jewish organizations condemned Kerry throughout the day for his remark.