President Mahmoud Abbas said Saturday that the unity government would continue to follow previous PLO policies and that he remains willing to extend peace talks with Israel, which halted the talks in response to a Fatah-Hamas unity deal signed earlier in the week.

"The upcoming government will obey my policy," Abbas told the PLO council. "I recognize Israel and reject violence and terrorism, and recognize international commitments."

What does Hamas have to say? So far, despite days of PLO officials promising that they accept existing agreements with Israel, Hamas has not uttered a peep except for an MP who disagreed vehemently.

In reaction to this speech, however, Hamas tried to distance itself from that part about recognizing Israel emphasized by Abbas: 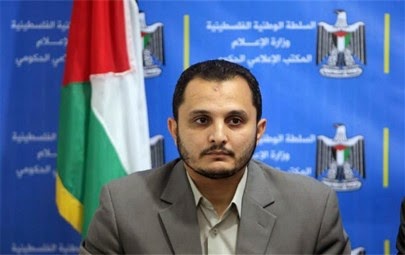 Ehab Ghussein, spokesman for the Hamas government in Gaza, said that "the speech of President Abu Mazen is mostly positive, except for some things that need to be emphasized. That which was contained in the agreement relates to the government of national consensus, and the only agreements we made [Cairo and Doha] for a government of national consensus have nothing to do in regard to political [policy] and are and non-binding, [such as whether the unity government would] recognize or not recognize Israel."


Ghuessin is correct: the Doha and Cairo agreements said nothing about the unified government's political positions on anything.

Saeb Erekat, the PLO's chief negotiator, took a different tack, saying that of course Hamas is not obligated to recognize Israel to be part of the government. Indeed, he said that they have the right no to recognize Israel.  Abbas added that Israel is interfering with internal Palestinian affairs by making such demands, and he added that Hamas is not a terrorist organization.

Both Hamas and the PLO are trying to have it both ways, playing Hamas as newly moderate to the West while insisting that Hamas has not changed at all to their own people.

What is ridiculous about this whole charade is not that Hamas is being misrepresented so that wishful-thinking Westerners will turn a blind eye to its explicit statements of support for terror and of destroying Israel.

No, what is ridiculous is that Fatah is exactly the same as Hamas in both those attributes but no one can say that aloud in English - not Israel which was forced to accept the terrorists of Fatah as a "peace partner," not the US and EU which believe that Fatah is somehow more moderate than Hamas.

Maybe Abbas is personally against terror and recognizes Israel in a limited way. But the fact remains that he is the head of Fatah which still, to this day, maintains several "military wings" including one that shot rockets towards Israel as recently as last month. Fatah's current political platform embraces terrorism. Abbas said explicitly in 2009 that there was no substantive difference between Fatah and Hamas.

And the PLO is controlled by Fatah.

This is the truth that no one dares to say out loud, and this is why the entire drama of the supposed unity between Hamas and Fatah is of little real consequence. The disagreement between Fatah and Hamas is not on their fundamental positions, but on how willing they are to lie about them.
Posted by GS Don Morris, Ph.D./Chana Givon at 8:39 AM