Sources tell Arab paper that Israel already violated the rules of the game, and that Hezbollah is "ready for war." 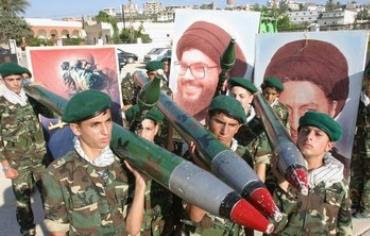 Hezbollah members carry mock rockets. Photo: REUTERS/Ali Hashisho
Sources close to Hezbollah’s leadership took responsibility for the bombing that injured four Israeli soldiers on the Golan border on Tuesday, telling an Arab newspaper that Hezbollah is “ready for war.”
They told an Arab newspaper that Israel violated the rules of the game when it attacked Hezbollah on the Lebanese-Syrian border last month, and that it showed Israel was “ready for war.”

Israel attacked, believing the party was busy in Syria and would not open up another front, said the sources quoted by the Kuwaiti newspaper Al-Rai on Thursday.
“The response was quick and we did not content ourselves to respond with our own strike, but to do even better, and we will increase them [these attacks] as well,” said the sources.
The attack last month by Israel was meant to test Hezbollah, to see if we would follow Syria’s example and not respond. However, Hezbollah is not like Syria, which is busy fighting against terrorists at home and avoids opening up another front, said the sources.

They said that Hezbollah will not hesitate to respond to Israeli attacks.
The sources from the Shi’ite group’s leadership said that the Golan attack was meant to send a message to the Israelis that Hezbollah is “ready for war.”
Israel’s missile defense system works 10 percent of the time against rockets from the resistance in Gaza, they said, so how will it work while facing thousands of long-range rockets daily? In the next battle, the group will not only act defensively, but will go on the offensive, said the Hezbollah sources, according to the report.
Meanwhile, local media reported intense Israeli activity over southern Lebanon on Thursday morning.
Israeli fighter jets performed mock raids at medium altitude starting from 9 a.m., Lebanon’s National News Agency reported.
A drone also took part, the Lebanese Army Command Guidance Directorate said in a statement.
“On Thursday at 9 a.m., an Israeli drone violated Lebanese airspace from above Alma al-Shaab village, executed circular flight over Tyre and Bint Jbail regions; and then left at 10:55 a.m. from above Rmaich village,” it said according to the National News Agency.
In addition, a gigantic Israeli air balloon carrying surveillance cameras was also launched over Lebanon.
Early Thursday morning, the Israeli army fired flares over the Shaba Farms (Mount Dov) area as drones roamed south Lebanon and patrols were conducted along the border, reported Lebanese Broadcasting Corporation International.
This comes a day after Israel attacked Syrian military targets in response to a bomb that wounded four soldiers along the border on the Golan Heights on Tuesday.
A Lebanese military court in Beirut sentenced 10 citizens, in absentia, to jail for allegedly spying for Israel.
Two were sentenced to life in prison for aiding the enemy and obtaining Israeli citizenship, UPI reported Thursday.
The other eight defendants were sentenced to 15 months in absentia for obtaining Israeli citizenship and entering Israel.