Israel’s envoy to Sweden slams Mideast specialist for comments; Jönsson: I was referring to Sharon’s military policies during the 1950s. 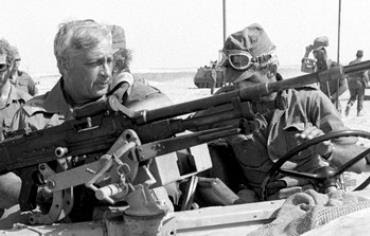 A young Ariel Sharon Photo: REUTERS/Handout .
BERLIN – Isaac Bachman, Israel’s ambassador to Sweden, slammed Per Jönsson, an associate editor at the Swedish Institute of International Affairs (UI), on Tuesday for comparing the military policies of the late Ariel Sharon to the Nazi regime.
Efraim Zuroff, the chief Nazi-hunter of the Simon Wiesenthal Center and director of its Jerusalem office, weighed in on the row, saying Jönsson’s statements likely come from anti-Semitism, a dislike of the Jewish state or both.
Writing on his Facebook page, Bachman said Jönsson “continues to ‘ride over Israel’s back’ on his way to fame. I guess he has not forgotten but ‘just’ ignored the fact that the Nazis were engaged in a genocide, with no provocation on behalf of their totally innocent victims, while Israel – from its very first day of independence – is defending itself from cruel and unceasing terrorism, and organized hatred towards Jews and Israelis alike.”

Bachman added, “but this is a minor detail to be even mentioned. It starts being boring to read the things Jönsson writes on the Middle East, since it will always follow the basic and simplistic guideline – ‘Israelis are the bad guys and this is common knowledge.’ The troubling thing is that, Jönsson writes and expresses himself in a very official framework. I hope and believe that at least some of his colleagues to the UI have a different attitude.”
Anna Jardfelt, the director of UI, wrote The Jerusalem Post on Wednesday, “The policy of the [UI] is that researchers and experts connected to the institute make comments on the basis of their own expertise. As an institute, UI does not promote any specific opinion or view. Our mission is to inform and enrich the public debate on foreign affairs and international relations.”
She continued, “as director I have great respect for Jönsson’s expertise. Personally, I would however not have used the expression which has been highlighted in the original article.”
In an email to the Post Jönsson wrote, “Just to repeat the point: I never did and I never will put Sharon, as a person or politician, in the same category as Hitler or Stalin. What I did, and do, is to say that some of what Sharon did, as commander of Unit 101, against civilian villages during the 1950s is almost comparable to some of the military methods used by Hitler and Stalin during WWII.”
Jönsson told the tabloid Expressen on Sunday that Sharon’s “military methods against Palestinians and Jordanians can almost be likened to those of Hitler and Stalin,” and, “Ben-Gurion gave him carte blanche to do whatever he wanted.”
Zuroff told The Post on Wednesday that “obviously the comparison of Ariel Sharon to the dictators Stalin and Hitler is outrageous and has no basis in historical fact. When such obviously inaccurate historical comparisons are made, they usually stem from anti-Semitism and/or animus against the State of Israel.”
After the Post published an article on Tuesday, with criticism of Jönsson’s parallels from the Israel advocate and secretary-general of the Swedish-Israel Information Center Lisa Abramowicz, Jönsson doubled-down and defended his comparison of Sharon with Hitler and Stalin.
In an interview with the Christian daily paper Världen idag, Jönsson said, “I am saying nothing about the Holocaust, but that certain methods Sharon used during this time [’50s and ’60s] reminded of how Hitler and Stalin acted in certain contexts.”
He said about Sharon that “as commander of Unit 101, formed at the initiative of [then-prime minister] David Ben-Gurion, he acted, in several instances, in a similar way in Palestinian and Jordanian villages as the Nazis did, e.g. when they destroyed the Jewish Ghetto in Warsaw after the uprising there. The civilian losses in Sharon’s hunt for enemies were big – old people, women and children in the dozens. This is well-known and has been pointed out by many Israeli writers and historians.”
Abramowicz told the Post on Wednesday, “I am upset at Jönsson’s defense of his views on Sharon. As a seasoned journalist he should be aware of the value of words and labels. There is no comparison between Sharon’s and Israel’s defense of Israel’s territory and its citizens against thousands of incursions, sabotage and terror acts in the ’50s and ’60s by Palestinian and Jordanian terrorists, and the destruction of the ghetto in Warsaw in 1943. Neither in purpose nor in scope!”
She added, “the purpose of the ghetto was to gather all Jews in Warsaw and surroundings, and through starvation and disease decimate them and then send the survivors to concentration camps to be killed, as part of their genocidal policy towards all European Jewry. Thousands were killed in the destruction of the ghetto and the survivors were sent to the camps.”
“There were hundreds of Israelis being killed between 1949 and 1954. That seemed to slip “the expert’s” [as he is called in the headline in Expressen] mind.
“I also find it mysterious that the journalist at Expressen, Fredrik Lennander has not a word or question for Jönsson when the latter makes the comparison to Hitler’s and Stalin’s methods,” said Abramowicz.
She continued, “allegations of Nazism when describing events should be used extremely carefully. I notice that there is a pattern among certain ‘experts’ or journalists to use it against only one country – Israel. Either to denigrate the country and its leaders or to diminish what Nazism really meant.
“Whatever the reason, I find it extremely disturbing, and suspect a bias towards the Jewish state. Especially considering what has happened in the world and what is happening right now in the Middle East, especially Syria.”
Posted by GS Don Morris, Ph.D./Chana Givon at 4:00 PM