Many of us who came from theocratic and patriarchal counties are wholly dependent on Canada's liberal, secular values to maintain our equality -- which others are working so tirelessly to curtail.
Not even one women's group come out to lobby for women's rights or to remind the nation that a decision to support segregation is a slap in the face of equality.
Reasonable accommodation is celebrating our holidays with joy; unreasonable accommodation is criticizing others who wish to say Merry Christmas and celebrate their cultures, too. 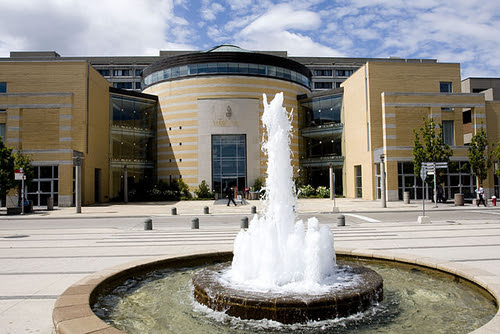 York University, where Sociology Professor Paul Grayson teaches. (Image source: Andrei Sedoff/Wikipedia)
Although Canada's diversity is usually touted globally, a clash of rights is now playing itself out.
Even though the struggle for reasonable religious accommodation is not a new issue in Canada, this is the first time that the challenge of religious accommodation at a secular institution of higher education is being noted, and argued, by the media here.


In September 2013, at York University in Toronto, a male student whose religious affiliation has not been revealed, asked to be excused for religious reasons from group work in which women were included. Sociology Professor Paul Grayson did not agree to the student's request; he said it marginalized females (who make up a majority of students at York) and was a sexist stance. The student relented and agreed to join the class. All was quiet until Professor Grayson decided to ask the university "brass" to weigh in. To his surprise, the Dean of the Faculty of Liberal Arts and the Director at York University's Centre for Human Rights said the student's request should be granted.
The case made headlines not only in Canada but internationally, where other Western countries with hugely diverse populations are also struggling with the challenges of competing human rights. There is already a petition supporting Professor Grayson's decision from two activist groups in London, England.
In UK, it has apparently become common practice to separate men and women at some lectures sponsored by Muslim groups. In November, the representative body of Universities [UUK] met with widespread opposition when it issued guidance endorsing gender segregation; it was forced to withdraw its guidance after intervention by Prime Minister David Cameron, who stated that gender segregation should not be enforced on audiences; he added, however, that such an opinion did not apply to worship services.
The UUK recently withdrew its guidance but left open the issue of voluntary segregation. A legal notice issued later, on behalf of a female student in the UK, stated that "gender segregation reinforces negative views specifically about women, undermines their right to participate in public life on equal terms with men and disproportionately impedes women from ethnic and religious minorities, whose rights to education and gender equality are already imperilled."
A poll taken by some media outlets shows that 70% of Canadians support Professor Grayson's decision and would like York University to take back its decision to segregate the classroom -- apparently out fear that if it does not, the precedent might be set for other, possibly unreasonable, accommodation. As Professor Grayson noted in his first response, "Can I assume that a similar logic would apply if the group with which he did not want to interact was comprised of Blacks, Moslems [or] homosexuals?"
He added that segregated classrooms could eventually require York to agree to segregated seating, segregated tutorials and even gender-specific instructors.
Grayson says that decision about this particular case will affect the future of gender equality at universities. If permission for gender segregation is upheld, it will open a Pandora's box for those who will undoubtedly come forward to ask for all sorts of other concessions.
Requests for religious accommodation are, however, already common in many Canadian schools. In October last year, some schools in Ontario said students should not dress up in Hallowe'en costumes because, according to the Niagara School Board, "some families don't participate in Hallowe'en, or can't afford costumes, and are excluded."
At the Valley Park Middle School in Toronto, where the Lord's Prayer was removed from schools many years ago, the principal allowed 400 Muslim students to pray in the lunchroom, with girls made to stand at the back. Educational institutions typically allow Muslim students to have special assigned rooms for prayer, where, if there is gender segregation, it remains within a specific group of people. Some colleges have built footbaths and special places for ablution. There has been no public dissent. Canadians, however, are now starting to ask how far religious accommodation can go before it becomes an impingement on the freedom of others. Although a nuisance, at least for now, it has apparently been viewed as a harmless one. The problem, as Grayson notes, comes later with: Where does it stop?
This issue is troubling at so many levels. Not even one women's group came out to lobby for women's rights or to remind the nation that a decision to support segregation is a slap in the face of equality.
Reasonable accommodation is good when not imposed from the top down. Reasonable accommodation is the multifaith chapel at Toronto airport with a large section for Muslims; unreasonable accommodation is the Muslim airport employee who insists on a separate room allocated only for him or her.
Reasonable accommodation is including Muslim books in the library; unreasonable accommodation is the demand to eliminate the Three Little Pigs from a traditional story. Reasonable accommodation is celebrating our religious holidays with joy; unreasonable accommodation is criticizing others who wish to say Merry Christmas and celebrate their culture, too.
Many of us who come from theocratic and patriarchal countries are wholly dependent on Canada's liberal, secular values of gender equality to maintain our freedom -- which others are working so tirelessly to curtail.
York University's decision to allow gender segregation suffocates and chokes the very values that make this country, and others like it, the great liberal, secular democracy we came here to seek.