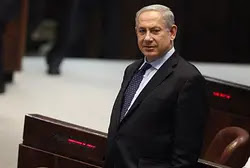 Prime Minister Binyamin Netanyahu was recovering on Sunday morning after undergoing an emergency hernia operation overnight, his office said in a statement.

The surgery, which took place at the Hadassah Ein Kerem hospital in Jerusalem, was successful and lasted about an hour, said the Prime Minister’s Office.
Netanyahu, 63, is expected to be discharged on Sunday afternoon. The doctors, who had originally planned to do the surgery under a local anesthetic, decided to perform it under general  anesthesia.

Until Netanyahu fully recovers from the operation, he will be replaced by Defense Minister Moshe Yaalon.

As a result of Netanyahu’s sudden surgery, Sunday morning's weekly cabinet meeting will be postponed. However, a session of a ministerial committee expected to approve the release of a first batch of 26 terrorists ahead of another round of peace talks with the Palestinian Authority will go ahead, and will be chaired by Moshe Yaalon.
Netanyahu felt pain during the day on Saturday and was examined by his personal physician Dr. Tzvi Berkowitz and by surgeon Prof. Aryeh Durst. The preliminary diagnosis, confirmed by a CT scan at the hospital, was a hernia and it was decided to have surgery overnight.
Here is the beginning of my post. And here is the rest of it.
Posted by GS Don Morris, Ph.D./Chana Givon at 6:28 AM