There's a new poll, conducted by Maagor Mochot and commissioned by Ma'ariv and the results are, after finding out that but 73% of the public knows what are the "Oslo Accords", that

57% believe that the Oslo agreements were injurious to Israel from a political, security and economic viewpoint and that 53% would not vote today in favor of an agreement that includes a withdrawal from Judea and Samaria, even if the Palestinians would recognize Israel as a Jewish state and give up the right of return. 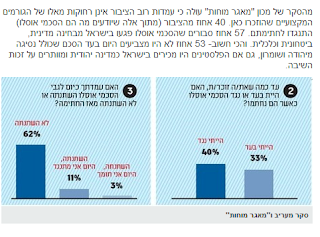 which indicate further that 40% were pro-Oslo at the time while 33% claimed to be against and that 62% haven't changed their minds, with 3% saying they are now for and 11% admitting they are now against.


Remember all, first 20th anniversary marking, in another week.


The survey was conducted by New Wave for Yisrael Hayom 15 August 2013 and published on 16 August.

Are you for or against release of prisoners are a gesture for the start of negotiations with the Palestinians?

Will a final agreement be reached this time that will end the conflict between the sides?