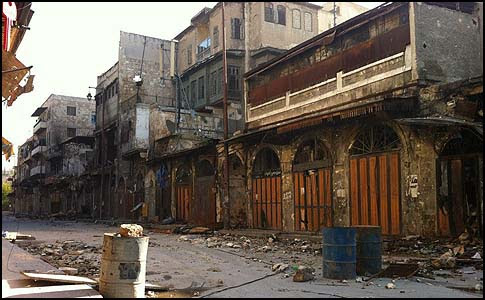 A Street scene in Aleppo, Syria.


There’s no doubt about it, with grinding poverty and homelessness, medical needs soaring and the sheer cost of having to bury tens of thousands of people who’ve been slaughtered make Syria an obvious candidate for humanitarian aid.
But.
Does it really make sense to transfer more than $519,000,000 worth of international aid to Syrian President Bashar al-Assad, when nearly every major world leader has predicted the imminent dismemberment of the Assad regime, if not the man himself?

Assad’s own mother has fled the country, following his sister Bushra who moved to Dubai, according to news reports.  They do not intend to return anytime soon, as Bushra has already enrolled her five children in a Dubai school. Bushra’s husband was killed in a bombing raid on July 18.  Since the fighting began, more than 600,000 Syrians have fled the country, many of the wealthy emigrating to Dubai.
If your only point of reference is the January 19 UN document explaining the rationale for the transfer to Syria of more than $500,000,000, you would be hard pressed to understand exactly what is happening in that country that has caused the huge increase in need for humanitarian aid.  The deaths of more than 60,000 in less than two years, which most people call the Syrian Civil War, are instead referred to in UN-speak as “the events in Syria since March, 2011,” or, sometimes, as “the current events.”
According to the United Nation’s Office for the Coordination of Humanitarian Affairs (UNOCHA), the Humanitarian Assistance Response Plan for Syria contemplates the transfer of $519,627,047 to cover the period of January 1, 2013 to the end of June, 2013. The reason for this new assistance plan is that the “indirect effects of the current events threaten a second major category of Syrians due to multiple effects of the current events.”  These include:

primarily: the aggravation of poverty; damage to housing and infrastructure including water and power utilities, schools, medical and other social service facilities, industrial and agricultural infrastructure (including fertilizer production and pharmaceutical industry); shortages of fuels, which affect the whole economy, including electricity and water supplies as well as transportation; disruptions to telecommunications; a rapid shrinkage of the private sector and most importantly the informal sector that employs a large proportion of the population leading to livelihood losses and rising unemployment, including in industry, agriculture and tourism; unsafe movement on major routes in the country and across borders is hindering internal and external transit and trade and inflating prices; the rising costs of imports due to devaluation of the local currency.

Oh, and the UN report also points out – by name – that “economic sanctions is further aggravating the situation.”
Incredibly, the report states that it “aims at supporting the Government of Syria’s [that's the Assad regime] efforts in providing humanitarian assistance to the affected populations.”  Most people in Syria believe it is the Assad regime that has created the huge increase in need for humanitarian assistance.
In addition to desperately needed food, medicine and medical equipment, and “appropriate emergency services,” the UN Plan has as one of its four objectives: “Support the government in the rehabilitation and reconstruction of critical infrastructure and vital public services affected by the current events through rapid repairs.”
Does it really make sense to hand over money to make rapid repairs to the infrastructure of a country that is in the process of blowing itself to bits?  Just last week two bombs exploded at the University of Aleppo, killing nearly 100 students, wounding dozens more and destroying several buildings.  The State Department condemned the despicable attack, laying the blame squarely on the Syrian regime.
And yet, the UN is planning on dispatching to Assad more than $500,000,000, to use either as bribes or perhaps for more weapons, or perhaps for humanitarian needs, but surely not for those who oppose the regime. But, in true Middle Eastern form, the need to bestow dignity and honor, even when it is ludicrous to do so, is employed by the UN.  The money is being handed over to the Assad regime.


All humanitarian assistance is, and will continue to be, delivered with full respect to the sovereignty of the Syrian Arab Republic during the implementation of this Response Plan.  Decisions on strategic or logistical issues including field office locations should be done after formal consultations with the government in order to receive the clearance and accreditation.

With all due respect, that’s nuts.