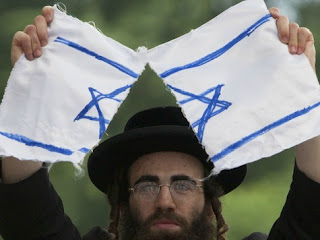 
The New York Times has now devoted two major articles, including a page one feature, to a mostly boring story about Bnei Jeshurun synagogue on the Upper West Side of Manhattan, whose Rabbis (J. Rolando Matalon, Marcelo R. Bronstein, and Felicia L. Sol) sent out an email in the wake of the UN vote to upgrade the Palestinians to observer status.

The email stated, “The vote at the U.N. yesterday is a great moment for us as citizens of the world. This is an opportunity to celebrate the process that allows a nation to come forward and ask for recognition.”

Now, does any really care about a ridiculous email that was sent to a congregation? Does this merit national attention? How could a deeply misguided communal email like this have caused such a ruckus? After all, we all agree that Rabbis are entitled to their opinions, however wrong, and should not be silenced.
But, it turns out that when Rabbis criticize Israel or are seen to join the other side, it's big news.


For the record, I like Bnei Jeshurun; I did the U.S. launch for my book Kosher Sex there in 1999, while still living in Britain. It’s a successful congregation that has fostered an affiliation with Judaism among many who might have remained on the outside.

But I learned something in Oxford as a Rabbi that I’ll never forget and even coined it as a phrase: tolerating the intolerable is the liberalism of fools.
The Palestinian Authority remains a force deeply hostile to Israel as a Jewish state, and Mahmoud Abbas has been adamant that he will not recognize Israel’s uniquely Jewish character. On April 27, 2009, he said, "A Jewish state, what is that supposed to mean? You can call yourselves as you like, but I don't accept it and I say so publicly."
Worse, the Palestinian Authority is an entity that continues to glorify terrorists who murder Jews. As Palestinian Media Watch reports, Abd Al-Baset Udeh, the murderer of 30 innocent Jews at the Passover Seder massacre, had a soccer event for teenagers named for him. His brother distributed the trophies.
And who can forget Dalal Mughrabi, the terrorist who led the bloodiest attack against Israel in history in 1978, when she and other terrorists killed 37 civilians, 12 of them children. This monster has had summer camps, schools, graduation ceremonies, and sporting events named for her.
Abbas himself seems to have a problem recognizing Jewish suffering. His 1982 thesis The Other Side: The Secret Relationship Between Nazism Zionism maintains that “less than one million” Jews died in the holocaust. Abbas also outrageously claimed that the Zionist leadership were collaborators with the Nazi regime to “facilitate the wide-spread destruction” of Jews.
But lest anyone say that all of this is in the past and Abbas is a new man, look at the speech that he gave at the UN for the observer status vote. He accused Israel of killing many Palestinians in the recent Operation Pillar of Defense in Gaza and intentionally causing ferocious damage to Gaza infrastructure.
Referring to the "Nakba-catastrophe" events of 1948, he said that Israel is a racist country committing modern ethnic cleansing. He added that Israel is guilty of colonizing Palestine and continuing its aggression.
Are these the pronouncements of a man who wants peace? Do they presage a Palestinian entity that will use its observer status to promote conciliation or one hell-bent on delegitimizing Israel?
So the question becomes, why would Rabbis endorse these words? Where is it a mitzvah to uphold the rights of one people when those rights are abused to defame, delegitimize, and destroy another?
No one disputes that Palestinians are equal children of God to the Jews and are endowed with the same inalienable rights. What is at issue here is why the Palestinians do not have a state. And the clear answer is that every time Israel has been misguided enough to trade land for peace it has mostly led to the land being used as a launching pad for wars of annihilation against Israel. Land for peace has always resulted in dead Jews.
If there are fewer dead Jews today at the hands of murderers who infiltrate from the West Bank it is not because of any lessening of the commitment on the part of terrorists to murder them, but because Israel has built a wall to keep the killers out.
There are, thank God, more than a billion Muslims in the world. But there are only fourteen millions Jews in the world and probably not more than a few thousand Rabbis in all of America.
Surely Rabbis should be firmly on the side of Israel.
No doubt the day will one day come when Arabs will reach out to Jews truly as brothers, and peace will break out across the globe, just as the prophet Isaiah foretold. But Rabbis forcing that day and pretending it's already here when so many of our Palestinian brothers are sadly still committed to the Jewish state’s destruction is dangerous, naïve, and the liberalism of fools.
Rabbi Shmuley Boteach, “America’s Rabbi” whom The Washington Post calls “the most famous Rabbi in America,” is the international best-selling author of 29 books, an award-winning TV and radio host, and is currently writing a new book on relationships entitled "Kosher Lust". Next month he will publish "The Fed-Up Man of Faith: Challenging God in the Face of Tragedy and Suffering". Follow him on Twitter @RabbiShmuley.