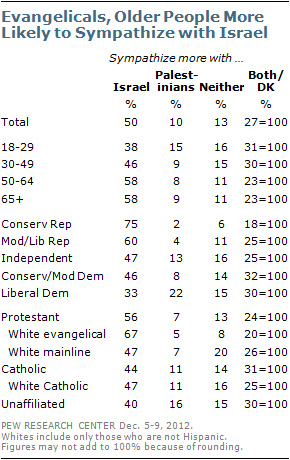 Attitudes on this question have been stable over the past six years, after showing more volatility in the middle of the last decade.

Among religious groups, white evangelical Protestants remain strongly supportive of Israel. Two-thirds (67%) say they sympathize more with Israel; only 5% say they sympathize more with the Palestinians. Opinion among other religious groups is more mixed. Catholics, for example, offer more sympathy for Israel than the Palestinians by a 44% to 11% margin.

Note that even the one group that was least sympathetic to Israel, liberal Democrats, shows that they are 50% more likely to sympathize with Israel than with the Palestinian Arabs.

And moderate Democrats were more sympathetic to Israel by nearly a 6-1 margin. Not the 37-1 of conservatives, but still very pro-Israel.

This must drive the haters completely bananas. Their shrillness gives the impression that they are mainstream, but they don't represent US liberals any more than Neturei Karta represent Jews.

I would love to see how J-Street members would answer the questions.