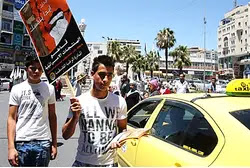 Man waves pro-boycott sign in Ramallah
Flash 90
A controversial new website levels a series of severe accusations at the Palestine Solidarity Campaign (PSC), the UK’s leading anti-Israel group. ‘Exposing the Palestine Solidarity Campaign’ alleges that extremism, support for terrorism, anti-Semitism and other forms of bigotry are “an institutionalized problem” within the PSC.
One of the site’s founders spoke exclusively to Arutz Sheva – on condition of anonymity – about the motivations behind the initiative.
‘It’s about telling the truth,’ he said, ‘and shattering the illusion that groups such as the PSC care one bit about human rights. They don’t. For them, the language of human rights is a tool to further an anti-Jewish agenda. Worst of all, the PSC ruins the efforts of those Palestinians who are actually striving for peace, through the PSC’s representation of the Palestinian position as one of absolutist support for terror, hatred and ignorance.’

The ultimate aim of the initiative – a joint project of Jewish and moderate Muslim activists – is to ‘defeat bigotry, in all its forms, and restore the human rights narrative to its rightful place.’
On its website, the PSC claims to campaign ‘for peace & justice for Palestinians, in support of international law and human rights & against all racism.’


Exposing the Palestine Solidarity Campaign has dismissed these claims:
‘You can’t claim to be “for peace, justice and human rights, and against all racism” on the one hand, and then go off and cavort with neo-Nazis, religious fundamentalists and other out-and-out anti-Semites on the other.’
Long list of allegations
The long list of accusations levelled by Exposing the Palestine Solidarity Campaign,
-- Support for Holocaust denial by various PSC members;
-- In contrast, the former chair of the PSC’s West Midlands  chapter openly endorsingthe Holocaust, and expressing the view that Nazi war criminals executed at the Nuremberg trials are "martyrs";
-- The strong influence of far-right and neo-Nazi groups within the P SC, including the PSC’s apparent use and endorsement of white-supremacist and neo-Nazi propaganda;
-- The PSC’s record of working with groups and individuals which openly support suicide bombings against Israeli
-- The PSC’s vocal support for infamous Islamist cleric Sheikh Ra’ed Saleh, the author of a vitriolic, anti-Semitic poem, who publically promoted the anti-Semitic ‘blood libel’ in front of a large crowd of supporters. (Saleh can also be seen in the video below gloating over his use of a swastika as a young boy, to antagonise his Jewish teacher.)
When asked about the accusations, a spokesperson for the PSC simply dismissed them as "basically made up" – a response that will be seen as far from satisfactory, given the scale of the allegations.
Keep well away
The website’s spokesperson issued a plea to "genuine supporters of human rights" to distance themselves from groups like the PSC.
"The PSC may employ a liberal, democratic narrative to advocate its message, but such claims are no more honest and no less divorced from the truth than similar assertions made by racist, far-right groups such as the British National Party.
"The PSC’s bogus humanitarian agenda is simply a tactic to draw in supporters and claim legitimacy in the eyes of the general public. Actions speak louder than words, and this initiative exposes the true anti-Semitic, racist, extremist face of the PSC for all to see. Anyone who genuinely cares about human rights should keep well away from them."