The Coming Sharia State of Egypt 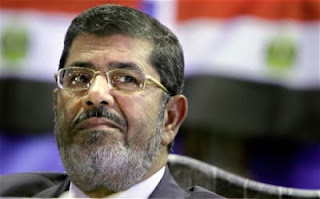 Egypt has now a modern pharaoh, named Muhammad Morsi, and with him as the sole ruler, the country will ultimately become an official Sharia state. Sharia is already enforced to some degree, but now that the Muslim Brotherhood is expanding its power, it will implement the edicts of its constitution, the Koran, to is fullest capacity.
This is was foreshadowed months ago when counter-revolutionaries were crucified in front of the presidential palace, since these type of executions are demanded in the Koran where it states that:


“The punishment of anyone who fight against Allah and His apostle and do mischief in the land is to be killed or crucified or to have their hands and feet from opposite ends or be banished from the land.” (Quran: The table spread)

That Egypt will become a Sharia state is most clearly shown in Egyptian politics itself. In September of this year, Egypt’s justice Hossam Ghariani, President of the Supreme Judicial Council, said in a video that the Egyptian people were demanding Sharia, and that to enforce it would be the correct choice:

Dr. Mohamed Yousry Salameh, the Executive Member of the Al-Dostur, founded by Mohamed ElBaradei, the father of the Egyptian Revolution, stated that the party needed to push the Muslim Brotherhood to begin an implementation of Sharia in Egypt:


So who is now stopping us from enforcing Sharia, including all its edicts as you all want? Answer: its the president, and his party [the Muslim Brotherhood]. It is he, after all who is in power… so what do they have to stop this [Sharia]? Answer: nothing. …They are some who say that the society is not ready for this [Sharia], but this is a statement if I said it, or so and so said it, they will peel his skin alive, while if others [the Muslim Brotherhood] say it is alright.

The statement implies that the only thing keeping Egypt from being a Sharia state was the Muslim Brotherhood itself. Now that Morsi has taken the position of dictator, it is now quite clear that the full enforcement of Sharia is on its way soon. The Christians will be massacred by orders from the state itself, and it will be happily done not only by government officers and soldiers, but by the Egyptian people themselves. Egypt will not be ruled under full dictatorship, but also by mob rule.
Tyranny is founded in the masses, and it is the great majority of the Egyptian people who want Sharia, and therefore it will be them who will take part greatly in killing Christians or any moderate Egyptians.
The people are to blame for this coming tyranny in Egypt; they wanted the ousting of Mubarak, the Muslim Brotherhood and the Salafist to rule, and Sharia to become the rule of the land. The current protest being done by Morsi’s rivals are irrelevant at this point, since there is nothing that can be done once Islamism seizes a nation. Most of the people wanted Sharia, and now they are going to taste it.
Theodore Shoebat is the author of the book, For God or For Tyranny.
Article printed from FrontPage Magazine: http://frontpagemag.com
URL to article: http://frontpagemag.com/2012/theodore-shoebat/the-coming-sharia-state-of-egypt/