Speaking at Turkish JDP conference, Egypt's President says he will "lend a hand to people of Gaza;" denounces Syrian regime. 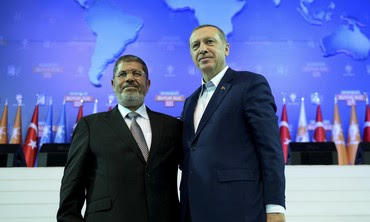 Photo: REUTERS
Egyptian President Mohammed Morsy pledged his support to the Palestinian and Syrian people on Sunday at the Turkish ruling party congress.

"We can never hesitate to lend a helping hand to the people of Gaza, our neighbors and brothers, as well as the people of the West Bank and all Palestinians everywhere,” Morsy told the general conference of the Justice and Development Party, the Egyptian Independent reported.

On the Syrian crisis, the Independent quoted Morsy as saying: "We will not settle down until the end of this bloodshed, until the will of the Syrian people to choose their leadership is met, and until current leaders who are unjust to their people and who shed their blood are removed."

Addressing the common goal of Muslim nations, Morsy continued: "Among our common goals is to stand together against injustice and discrimination, and against all attempts to control the will of people or governments," the Egyptian Independent quoted Morsy as saying.

At the same conference, Turkish Prime Minister Recep Tayyip Erdogan trumpeted Turkey's credentials as a rising democratic power at the conference, saying his Islamist-rooted ruling party had become an example to the Muslim world after a decade in charge.

"We called ourselves conservative democrats. We focused our change on basic rights and freedom," Erdogan told thousands of cheering party members at the congress in a sports stadium in the capital Ankara.

"This stance has gone beyond our country's borders and has become an example for all Muslim countries."

Erdogan also renewed his criticism of Russia, China and Iran, which have backed Assad in the 18-month uprising, saying history would "not forgive those who stand by oppressors".

Egypt's Morsy echoed the sentiments, telling the congress that a quartet of regional powers consisting of Egypt, Iran, Turkey and Saudi Arabia would continue to push for a solution.

Meanwhile in Syria, large parts of Aleppo's covered market, the largest of its kind in the world and a UNESCO world heritage site that traces its history back to the 14th century, have been reduced to ashes as government forces and rebels fight for control of the city.

The historic market was largely undamaged by earlier fighting in Syria's largest city, but in the early hours of Saturday some of its shops caught fire during clashes in circumstances that remain unclear.

The flames spread rapidly, partly because many of the small retail units tucked beneath the market's ancient arches were full of fabric, and have now ravaged at least 1,500 shops and are still burning, activists said.

"It is not only the souk that is burning, my heart is burning as well," said an anti-government activist called Hashem who learned the craft of jewellery-making in the souk before the revolt against President Bashar Assad erupted last year.

The souk's devastation is a reminder of how the 18-month-old conflict - in which both sides are struggling to gain the upper hand and activists estimate 30,000 people have been killed - is destroying Syria's rich cultural and historical legacy as well as the lives of its 22.5 million people.

Reuters contributed to this report.
Posted by GS Don Morris, Ph.D./Chana Givon at 6:54 AM