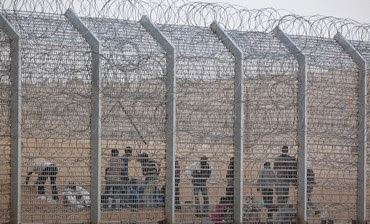 Photo: reuters
A total of 122 illegal migrants crossed Israel’s southern border with Egypt since the beginning of September and were jailed at the Saharonim Prison facility in the Negev, the Interior Ministry’s Population, Immigration, and Borders Authority (PIBA) said Saturday.

The number refers only to those who were apprehended by Israeli authorities after crossing into the country. It represents a small drop from August, when some 199 were arrested. That said, the figure does represent a dramatic drop over the same period last year when 2,000 African migrants crossed into Israel.

According to PIBA figures, some 10,175 illegal migrants crossed into Israel from Egypt between January and the end of September: 6,375 from Eritrea, 3,597 from Sudan, and the rest from elsewhere in Africa. Of these, 83% were males.

These figures also appear to represent a decrease over last year, when PIBA said some 17,201 migrants crossed into Israel.

As of August a total of 62,792 African migrants were in Israel, according to PIBA.

The government has credited the decline to the ongoing construction of a security fence along the 240-km Egypt- Israel border. The decrease also comes as Sinai is riven by clashes between terrorist gangs and the Egyptian army, and reports that Israel has adopted a policy of returning to Egypt migrants caught trying to cross into Israel.
Posted by GS Don Morris, Ph.D./Chana Givon at 6:32 AM