India: The Next Terrorist Insurgency

Because terrorism works: The death of a U.S. Ambassador in Libya, after all, seemed sufficient to convince many Americans that they should flee the entire Islamic world.

Although so far India's Maoists have shown little interest in attracting global attention by attacking international targets, journalists who study their insurgency reckon that they need only be patient: The Naxals will figure it out soon enough. Then the journalists' careers as International Naxal Experts will be assured.

Why do the journalists reckon this? Because terrorism works: The death of a U.S. Ambassador in Libya, after all, seemed sufficient to convince many Americans that they should flee the entire Islamic world.


The problem is not that America has insufficient intelligence; America has insufficient patience and insufficient curiosity. One look at the map below should be sufficient to suggest to you that a Maoist insurgency covering a third of the territory of the world's second-most populated country should receive attention from the media. Why doesn't it? Because it is far away. The insurgency is very well-covered in India -- in the English-language press, at that -- but Americans do not read the Indian press. The Indian government is not keen to encourage foreign journalists to report on the insurgency; no one can blame them: the antidote to the insurgency is to gain state control over the Naxal-infested areas. To do this, India needs foreign investment -- a lot of it, fast. Investors would not like the sound of this insurgency if they knew about it. 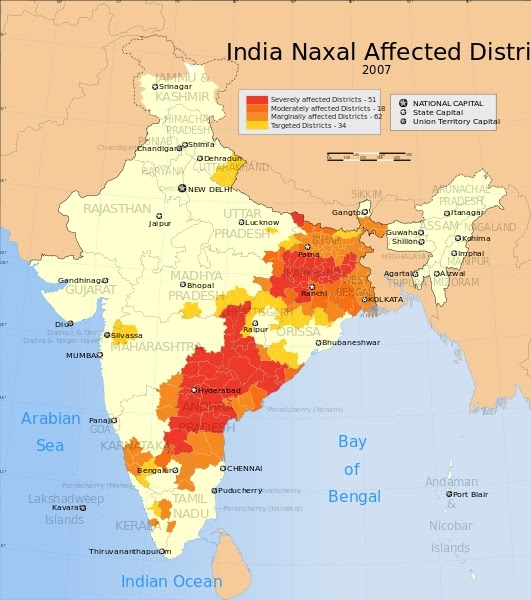 That many Americans have never heard of a story so manifestly important is evidence that America is, if it continues to slide-line itself, in the terminal phase of imperial decline, which, one is tempted to conclude, seems exactly what the current administration wants: to deliver the world to despots.

Britain lost its empire because it was obsessed with preventing the 1857 mutiny -- which had already happened, so there was no point in preventing it. Focusing on the threat of violent seditious activity, colonial authorities underestimated the threat of non-violent sedition. They thus lost access to Indian society precisely when they needed it most. As Britain's intelligence bureaucracy grew ever more elaborate, the scope of its security efforts narrowed -- even as the scale of the secessionist threat grew. Britain's imperial policy suffered from a chronically poor sense of timing. Moderate nationalist leaders were marginalized, militant ones strengthened. Over time, the militants gained respectability. The British authorities had detailed knowledge of secessionist plans, but failed to prevent them from from being realized. They did not understand these plans, and relied upon analytical models that were out of date. Crucially, British India lost the ability to recognize gaps in its own coverage. Precisely as the need for information about secessionist activities increased, its interest in this information decreased. As militant nationalism made inroads, sources of intelligence to the colonial Government dried up. As the popular base of the secessionist movement widened, the Government's response narrowed -- it focused only on containing the violence. The information in its possession was evaluated from an excessively narrow, binary perspective: Did it suggest an imminent threat to British life and property? Authorities were incapable of asking themselves the larger question -- was the entire British empire at threat?

British authorities failed to grasp the larger picture. Cultural barriers distorted threat perception and led to misdirected countering action. This distortion did not occur for want of information: Britain's vast bureaucratic apparatus ensured an abundance of it. But the British did not recognize its strategic value until it was too late. Information was plentiful; insight was scarce.

Brave posturing and stentorian denunciations in the wake of the latest terrorist outrage are no substitute for insight. For insight, look at that map.