The death of Camp David? On the real world consequences of “Land for Peace”

A guest post by Gidon Ben-Zvi, who blogs at Jerusalem State of Mind 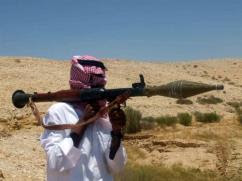 Terrorist in Sinai with RPG

Does “land for peace” work?
Recent developments in the Sinai Peninsula, where the ‘Red Sea Riviera’ has spiraled into anarchy and violence, has put into sharp focus the serious consequences of Israel’s initial decision to embrace retreat as a guiding diplomatic philosophy.

The outbreak of hope that erupted following the signing of the 1979 peace treaty between Israel and Egypt was palpable.

Based on 1978′s Camp David Accords, this first attempt at a comprehensive peace between Israel and one of its neighbors was a valiant attempt to end 30 years of relentless hostility and costly wars.

Did the Israelis truly desire peace?

Well, by withdrawing from Sinai, Israel gave up:
Furthermore, Israel relinquished Taba — a resort built by Israel in what had been a barren desert area near Eilat — to Egypt in 1988. Taba’s status had not been resolved by the Camp David Accords.


In return, what was Egypt’s contribution to peace? A promise to end belligerence and military aggression.

While the Jewish State sacrificed much for the sake of peace, including an opportunity to become energy independent, the Middle East’s most powerful Arab nation reciprocated with a cold, if non-belligerent, shoulder.

While this frigid yet tolerable status quo defined relations between Jerusalem and Cairo for three decades, the 18 months since the Egyptian revolution forced out President Hosni Mubarak – ushering in an Muslim Brotherhood-led government – has transformed the Sinai into a vortex of chaos and violence. And the deteriorating security situation across its southern border has shocked Israel into coherence.

With Egypt firing missiles in the Sinai Peninsula for the first time since the 1973 Yom Kippur war, following an upsurge in Islamist attacks in the region, both Israel and Egypt must come to terms with the phantom peace of 1979 and consider seriously revising the terms of the treaty – for the sake of both countries.

It may well be time for Israel and Egypt to revisit the negotiating table with the aim of developing an action plant to confront and quell the Islamist insurgency that has swept over the Sinai Peninsula.

While Sinai’s spiraling out of control is due in part to such “imports” as global jihadist groups infiltrating the peninsula, the local population has also joined in on the festivities. In her latest Guardian report, Harriet Sherwood asserts that the vast desert peninsula is inhabited largely by Bedouin tribes, who for decades have been marginalised, neglected and impoverished.

Choosing a compelling narrative over facts on the ground, Ms Sherwood significantly downplays the Sinai Bedouins’ contribution to the reign of anarchy that has taken hold of the peninsula.

In truth, the Bedouins of the Sinai have rather cashed in on the lawless state of affairs. Tribesmen have been smuggling in Eritrean and Sudanese fortune seekers who are, along with drugs and weapons, smuggled into Israel.

And post-peace Sinai has inflicted a body blow to Israel’s security in another way. For it is through the peninsula that most of the weapons Hamas has succeeded in stockpiling in Gaza were smuggled in through the tunnels connecting the Gaza Strip with Sinai.

What a difference a peace makes, no? Israel’s original capitulation spawned many others. The pullout from Sinai set the stage for later expulsions and launched a three-decade long period rife with Israeli retreat.

And have all these retreats – Bethlehem, Hebron, Jenin, and Gush Katif- brought Israel one moment of peace? The grandchild of the 1978 Camp David Accords, the Oslo process, brought only a dramatic escalation in violence and bloodshed.

Necessity being the mother of invention, Israel must take a cold, hard look at the failed promises, dashed hopes and lives lost as the direct result of the strange calculus known as ‘land-for-peace’. Going forward, a new diplomatic paradigm, based on mutual respect, trade, tourism, investment and collaborative efforts in the fields of technology and medicine should be developed. In other words, scrap land-for-peace and replace it with peace-for-peace.

Until then, Israel and its neighbors are destined to wallow in a state of low-level bellicosity, with occasional flare ups as we’ve seen over the last several days in the Sinai Peninsula.