A recent update by the European Commission's Taxation and Customs Union of its list of global imports' locations that are eligible for tax breaks has excluded Modiin, effectively rendering it "outside" of Israel's territory.

The EU's list, meant to advise importers of location from which products may or may not be eligible for such breaks, had previously labeled many cities located in the West Bank and Golan Heights as "under Israeli control," and thereby subjected to any EU-Israel trade agreements.

Modiin, or Modiin-Maccabim-Reut, which is located in central Israel, about halfway between Jerusalem and Tel Aviv, was on the list – until now.

Since 2005 and according to the trade agreements, any product manufactured by Israel for export to the EU must be clearly labeled in a manner which shows exactly where it was made.

The commission has decided to include the zip codes of Modiin-Maccabim-Reut in the list. The "Non Eligible Locations" list states the following:

"The list below is drawn up for the purpose of determining whether products may be eligible for preferential tariff treatment under the EU-Israel Association Agreement(1). Such treatment will be refused to products for which the proof of origin indicates that the production conferring originating status has taken place in a locality within the territories brought under Israeli administration since June 1967."

The Israeli mission to the EU explained Tuesday that the EU has decided to unilaterally change Modiin-Maccabim-Reut's statues to that of a city located outside the Green Line.

The move is unlikely to have any major effect on Israel's economy.

Sources familiar with import rules told Ynet that the move means to enhance the regulation placed by the EU on products made by Israeli communities in the West Bank, which for itself represents a capitulation to pro-Palestinian elements seeking to derail Israel's economy. 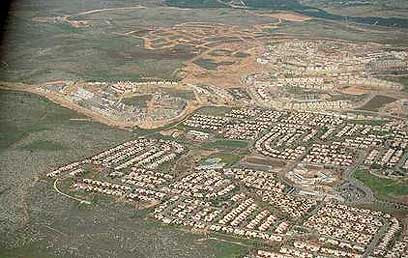 However, the sources stressed that a cursory review of the list found that the zip codes included on it did not include Modiin's industrial zone or any industry that currently exports products to the European Union.

The Israel Export Institute said that move was puzzling, adding that "As an organization that aspires to promote Israeli exports we decry any limitation that may infringe on Israeli exporters' activities, even if the steps pertain to small industrial zones."

'Modiin is integral part of Israel'

The Foreign Ministry said that "The European Union is ignoring reality by including in the (Israeli-Palestinian) conflict areas that are completely unrelated to it.

"This action has the air of dubiousness to it and the Israeli Embassy in Brussels has filed a formal protest with the EU's institutions."
The Foreign Ministry added that "Anyone familiar with reality knows beyond all doubt that Modiin-Maccabim-Reut is an integral part of Israel, and their future is certain.
"As for the other cities and communities on the list, Israel is familiar with the EU's approach and we don't approve of it. Diplomatic negotiations on the matter are ongoing."
Minister of Public Diplomacy and Diaspora Affairs Yuli Edelstein added that "If Modiin isn’t a part of Israel then the EU is not part of reality. As far as the EU is concerned, it appears that Tel Aviv, Itamar, Modiin and Beit El are all in illegitimate territory.
"I hope that the EU will dig down into its administrative perceptions and conduct and that it will stop trying to gnaw away at Israel's sovereignty."

Modiin-Maccabim-Reut's Mayor Haim Bibas was outraged to learn of the decision and told Ynet that it may cause the city's image irrevocable damage.

The city, which municipally joined three communities, has a thriving industrial zone made up mostly of large industries' logistic centers.
"This decision is wrong and it has nothing to do with reality on the ground," Bibas told Ynet.