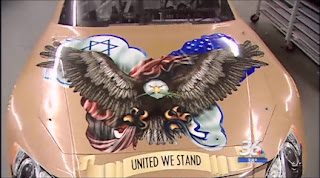 HARRISBURG, N.C. -- Two Charlotte men are putting their passion for American-Israeli relations on the hood of a Daytona 500 stock car.

The No. 49 “America Israel Racing” car is owned by Robinson-Blakeney Racing and driven by J.J. Yeley.

Friends Rich Shirey and Mark MacCaull said they came up with the idea for America Israel Racing at their daughters’ horse show in late 2011. Shirey said they wanted to find a way to educate the public about the relationship between the United States and its Middle Eastern ally.

They decided NASCAR seemed the best fit. “NASCAR is the only sport televised where they pray before every race,” said MacCaull, who has a background in the sport. “They are aligned with racing, religion and patriotism. We do not want to profit from this. Our goal is simply to educate people.”

It’s an unusual - and expensive - textbook. The friends funded the car for the Daytona 500 completely on their own. A basic full-car sponsorship can come in at around $10 million.

“It isn’t cheap,” said Shirey. “But being brought up Southern Baptist, I was always taught we stand behind Israel. This is a way I felt I could give back to society. It’s something I believe in.”

Both Shirey and MacCaull said they know that belief is controversial to some, but insisted this is not politically motivated.

So far, America Israel Racing will serve as the No. 49 car’s predominate sponsor in the Daytona 500 and the following race in Phoenix. The team said it hopes to run the entire schedule, but would need financial assistance to go beyond the first few races.

To learn more about America Israel Racing, log onto the web site www.AmericaIsraelRacing.com or follow on twitter.com/@amisraelracing