A Kosovo Model for Syria 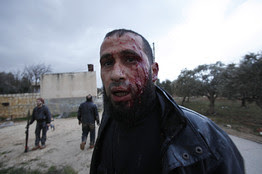 The bloodshed and the brutality of the dictatorship in Syria are at long last beginning to challenge the passivity of the Obama administration. The word is out that the Pentagon has launched a “scoping exercise” to determine what could be done should the president want to respond to the Syrian catastrophe.For months, the administration pursued the mirage of a United Nations Security Council condemnation of Damascus, when there was no chance that Russia and China would go for it. The administration persisted even though a similar effort last October ended in failure. There was no need to court the Russians. We granted them the pride of being treated as a great power, and they played it for all it was worth, at home and abroad. The time wasted on the courtship of Russia should have been put to use “scoping” ways the Syrian dictator Bashar al-Assad could be brought down. We have been here before: waiting in the face of rampant terror, exaggerating the power of regimes engaged in mass murder when deterrent power would have put an end to their barbarism. In the Obama world, the tendency to wait has become official policy: It is either boots on the ground or head in the sand. Where drones and Navy SEALs can’t do the trick, we leave the world untended.

President Obama isn’t about to adopt the exercise of American power and burdens during the era of George W. Bush as his own. But in the face of this Syrian dilemma, he would be wise to consider the way Bill Clinton dealt with the crisis of Kosovo in 1999. Not unlike our current president, President Clinton wanted nothing to do with Kosovo when that last of the wars of Yugoslavia erupted with fury in early 1999.

American power, it should be recalled, had rallied to the defense of the Bosnians four years earlier. The horror of Bosnia had gone on for 30 cruel months, under George H.W. Bush and President Clinton alike. Legends were told about the might of the Serbs, but they were broken with relative ease and the Bosnians were rescued when President Clinton decided that American honor was sullied by the genocide in that corner of Europe—and he unleashed the power of NATO’s bombers.

But the Serbian strongman Slobodan Milosevic was not done. He was determined to deny the Kosovars their autonomy. There had been a terrible summer in 1998, more than 300,000 Kosovar Albanians had been forced to leave their homes. “Ethnic cleansing,” that awful euphemism, was again everywhere in the news.

For President Clinton, it was yet another plunge into the Balkan inferno. He authorized a NATO air campaign against Serbia that began on March 23, 1999, the very same day a bipartisan majority in both houses of Congress voted to support it. Two days later, President Clinton spoke to the American people and laid out the stakes in that conflict—the future of Europe, the line to be drawn for brigands and killers challenging the order of nations.

The air campaign lasted 11 weeks, included more than 30,000 sorties, and crippled Milosevic’s ability to wage war on the Kosovars. The economic and military infrastructure of Serbia was damaged, even the home of Milosevic was targeted. Though a “war president” is the last thought that comes to mind when thinking of Bill Clinton, he stayed the course.

Prompted by British Prime Minister Tony Blair, President Clinton was even willing to countenance the use of ground troops. It didn’t come to that—an independent Kosovo was midwifed by a moderate and limited exercise of American power. We lost no American soldiers in that campaign. Two planes were lost, but their crews were recovered safely.

All this was done outside the suffocating confines of the U.N. Security Council. There was no court paid Russia, even when its president, Boris Yeltsin, was on the best of terms with Washington. Two days after the end of hostilities, there came a farcical exercise of Russian power. Fifty vehicles with 200 Russian troops rushed into Kosovo from Bosnia and occupied the Pristina airport. Graciously, they were eventually folded into the U.N.-sanctioned NATO forces.

Editorial board member Matt Kaminski provides an update on the violence in Syria and the Egyptian hostage situation.

Two weeks after the end of the fighting, more than 700,000 Kosovars returned to their homes and villages. President Clinton—who would, in time, note the shame of leaving Rwanda to its terrors—would speak of Kosovo with pride in his 2004 autobiography: “The burning of villages and killing of innocents was history. I knew it was a matter of time before Milosevic was history, too.”

In this Syrian ordeal, President Obama has a similar opportunity to stop “the killing of innocents” in Homs, Hama and Deraa. The Damascus regime is living on bluster, running out of money, and relying on an army that has no faith in the mission given it or in the man at the helm. It could be brought down without a massive American commitment.

We could, with some moral clarity, recognize the Syrian National Council as the country’s legitimate government, impose a no-fly zone in the many besieged areas, help train and equip the Free Syrian Army, prompt Turkey to give greater support to defectors from Syrian units, and rally the wealthy Arab states to finance the effort.

There are risks to be run, no doubt. But at present we have only the shame of averting our eyes from Syrian massacres. If we act now, President Obama, when he pens his memoirs, could still claim vindication, or at least that he gave Homs and Hama and Deraa his best.

Mr. Ajami is a senior fellow at Stanford University’s Hoover Institution and co-chair of Hoover’s Working Group on Islamism and the International Order.
Posted by GS Don Morris, Ph.D./Chana Givon at 3:46 PM