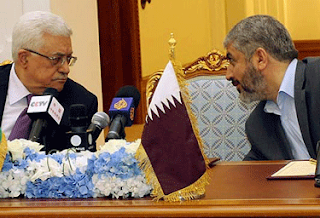 The cruel farce known as the peace process took another downturn this week as Fatah and Hamas signed a unity agreement in Doha, Qatar.

It’s not the first such agreement they’ve signed, and none of the previous instances was a smashing success. Most notably, the two sides’ Mecca Agreement of February 2007 collapsed four months later in Hamas’s bloody ouster of Fatah from Gaza; and the agreement reached in Cairo last May never got off the ground.

This time, though, there may be a crucial difference. It has to do with the mounting momentum of what’s called the Arab Spring. Hamas was long the Sunni odd-man-out in Iran’s Shiite-dominated alliance. This year, though, top Hamas officials have had to leave Syria for refusing to support Bashar Assad’s brutality against the largely-Sunni populace. Meanwhile Hamas’s star has been rising again in the Sunni world—as evidenced by Gazan Hamas leader Ismail Haniyeh’s recent well-received tour of Turkey, Tunisia, Egypt, and Bahrain.

Israeli analyst Jonathan D. Halevi suggests Hamas is “trying to implement the strategy of the Arab Spring in the Palestinian arena.” On the background of the Islamist ascendancy in the region, Hamas sees its position among the Palestinians as strong and believes it will easily defeat Fatah in the elections envisaged by the Doha agreement.

If so, what’s in it for Fatah? In Halevi’s view, its leaders have the same perception as Hamas and believe their brand of relatively secular nationalism is on the downswing in the West Bank and Gaza as in most of the Sunni Arab world. Hence, in signing the Doha agreement, “the Fatah leaders prefer swimming with the current”—trying to hitch themselves to Hamas instead of fighting it—“to sinking beneath it.”

The terms of the agreement seem to bear out that analysis. A new unity government of technocrats is supposed to be set up, with Abbas as prime minister—but only for an interim stage. This government’s main task would be preparing for presidential and parliamentary elections in the West Bank and Gaza. Since Abbas is currently president, his own rule would be on the line.

Most significantly, the Doha agreement says the sides are supposed to discuss incorporating Hamas into the PLO—the larger organization that encompasses Fatah and the Palestinian Authority. That, in other words, would mean the end of the Fatah-Hamas bifurcation that has enabled the purported “process,” with the U.S., Europe, the Israeli left and, more recently, the Netanyahu government, upholding the idea that Fatah represents a moderate wing that can be dealt with.
At least, the dominant Israeli perception is that the PLO’s morphing into Hamas would mean the end of what’s left of that “process.” As Prime Minister Binyamin Netanyahu said in response to Doha:

The problem is that the international community, which Netanyahu has striven to keep on his side, is already reacting much less unequivocally.

U.S. State Department spokeswoman Victoria Nuland said in response to the Doha deal: “questions of Palestinian reconciliation are an internal matter for Palestinians.” A spokesman for EU foreign policy chief Catherine Ashton said the EU “looks forward to continuing its support.” UN Secretary-General Ban Ki-moon called Abbas to tell him to stay on the path of “peace”—with Hamas at his side.

Netanyahu, no doubt, has criticized Abbas and Fatah’s gross travesties of “peace” as well—as in recent egregious instances of Abbas’s photo-op in Turkey with a Palestinian child-murderer, the Palestinian Authority mufti’s calling for the genocide of Jews, and PA TV’s glorification of the Fogel family murderers. At the same time, though, Netanyahu has toed the international community’s line of casting Abbas and Fatah as his peace partner and the potential rulers of a state living in “peace” beside Israel.

If the Doha deal progresses, the same international community that has learned to excuse all Fatah outrages is likely to start showing leniency to Hamas as well—especially if it assumes the PLO trappings. It looks like it’s time, then, for Netanyahu to come cleaner not only about Hamas but the Palestinian “partner” in general.
Posted by GS Don Morris, Ph.D./Chana Givon at 3:14 PM