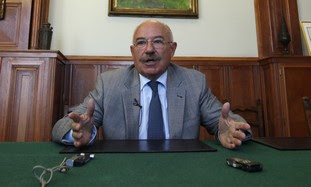 Hungary rejects the statements of “Gyongyosi, the party’s foreign affairs spokesman, [who] questioned the number of Hungarian Holocaust victims and compared Israel to a Nazi system,” a ministry spokesman said, according to the Hungarian news agency MTI. The spokesman added that Hungary’s Foreign Ministry opposed Jobbik’s pro-Iran position and “Jobbik supported Iran.”

Hungary’s diplomatic spokesman stressed that the government is committed to maintaining the memory of the Shoah and to foster Holocaust education and research, as well as compensation for the victims and their families.

Hungary “rejects all forms of Holocaust denial,” he said.

The London-based Jewish Chronicle first reported on Gyongyosi’s expression of Holocaust denial, his comparison of Israel to Nazi Germany, and his party’s embrace of the policies of the Islamic Republic of Iran. After reports appeared in the Chronicle and The Jerusalem Post, Hungary’s Foreign Ministry issued statements condemning Jobbik.

The ultra-nationalist Jobbik party is Hungary’s third largest, with 47 parliamentary seats. It is widely considered to be anti-Roma and anti-Sinti, homophobic and anti-Semitic.

In a wide ranging interview with the Chronicle conducted in Hungary, Gyongyosi questioned whether 400,000 Hungarian Jews were murdered or deported during the Holocaust.

Dr. Efraim Zuroff, the head of the Jerusalem office of the Simon Wiesenthal Center, told the Post on Monday, “There are two separate issues here with a very tenuous connection. There is no question that the current Hungarian government does not in any way subscribe to Jobbik’s support for Iran and outright Holocaust denial.”

Zuroff added that with respect to the second issue, “there is legitimate concern regarding the tendency of Fidesz to equate Communist and Nazi crimes (denial of both are illegal in Hungary), and support among elements of the party for a rewriting of the accepted Holocaust narrative which would minimize the responsibility of Hungarians for the crimes committed in Hungary. One of the best tests on this issue will be whether the government tries to rewrite the texts in the excellent Holocaust Museum in Budapest, unique in Eastern Europe, regarding this issue. There have been statements by Hungarian officials about an intention to do so and it remains to be seen, whether this will, God forbid, actually be done.”

Gyongyosi further told the Chronicle, “I always support the position of a threatened country.

Iran is in the center of a Middle East axis that Israel and the US want to subjugate and keep under their control. Iran is an extremely peaceful country and never started a war, unlike Israel, which has declared wars on anything and everybody around it.”

The Hungarian Foreign Ministry spokesman said on Sunday that the government shares the concerns of the EU regarding the Iranian crisis.

In e-mail to the Post on Monday from Vilnius, Prof. Dovid Katz, editor of DefendingHistory.

com, wrote, “Sure, the Hungarian Foreign Ministry is to be commended for its repudiation of the Jobbik party’s latest anti- Semitic outbursts, after these were exposed internationally by the Jerusalem Post and the Jewish Chronicle. But press release ‘quick-fixes’ for PR disasters are not enough.”

Katz, who has written about anti-Semitism in Eastern Europe, said, “The Fidesz government has itself, like a number of East European states, been fomenting a rather sophisticated brand of East European exclusivism rooted in ultra-nationalism, Holocaust obfuscation and something that invariably accompanies state-tolerated prejudice against segments of a nation’s population – the diminution or dismantling of robust democracy.

In response to criticism leveled against the nationalist government of Fidez Prime Minister Viktor Orban, the Foreign Ministry spokesman said that Hungary “categorically rejects all malicious attempts to stoke anti-Hungarian hysteria” by conflating the policies of the government with those of “irresponsible far-Right politics.”
Posted by GS Don Morris, Ph.D./Chana Givon at 4:42 PM