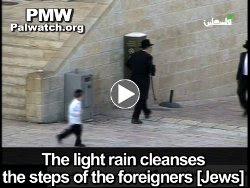 A Palestinian Authority TV program stated that rain falls on Jerusalem to wash away the impurity of the footsteps of Jews on behalf of Muslims who come to pray in the city.

The following is the text as broadcast on official PA TV:

"The golden dome [of the mosque] shines with colors of the sky, with the white of clouds, while the joyous holiday [Eid Al-Adha] is good to the residents. The light rain cleanses the steps of the foreigners [Jews] so that the feet [of Muslims] in prayer will not step on impurity." Palestinian Media Watch reported a few months ago that the same PA TV program, Sights of Jerusalem, portrayed Jews praying at the Western wall as "sin and filth." It also stated that the PA plans to build an Arab residential area in place of the Western Wall Plaza in Jerusalem "when they [Israelis] disappear from the picture, like a forgotten chapter in the pages of our city's history."

The following is the transcript from the PA TV program in August:

"They [Israelis] know for certain that our [Palestinian] roots are deeper than their false history. We, from the balcony of our home, look out over [Islamic] holiness and on sin and filth (Jews' praying at Western Wall) in an area that used to have [Arab] people and homes. We are drawing our new maps. When they [Israelis] disappear from the picture, like a forgotten chapter in the pages of our city's history, we will build it anew (residential area). The Mughrabi Quarter will be built here (on the Western Wall Plaza)."
[PA TV (Fatah), Aug. 10, 2011]

The Palestinian Authority denies that Jews have any historical rights to Jerusalem and even to the Western Wall, a remnant of the Temple Mount, which is Judaism's holiest and most important prayer site.
Posted by GS Don Morris, Ph.D./Chana Givon at 10:01 AM