Palestinian Arab "refugees" wouldn't be citizens of "Palestine" - even if they live there! 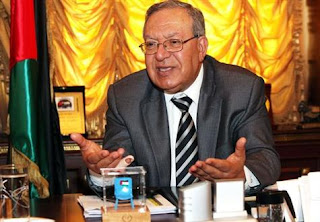 Did you think that 63 years of Arabs using the "refugees" as political pawns would end if there was a Palestinian Arab state?

If you want to know the depths of cynicism of the Palestinian Arab leadership towards their people, you must read this article in The Daily Star Lebanon:

Palestinian refugees will not become citizens of a new Palestinian state, according to Palestine’s ambassador to Lebanon.

From behind a desk topped by a miniature model of Palestine’s hoped-for blue United Nations chair, Ambassador Abdullah Abdullah spoke to The Daily Star Wednesday about Palestine’s upcoming bid for U.N. statehood.

The ambassador unequivocally says that Palestinian refugees would not become citizens of the sought for U.N.-recognized Palestinian state, an issue that has been much discussed. “They are Palestinians, that’s their identity,” he says. “But … they are not automatically citizens.”This would not only apply to refugees in countries such as Lebanon, Egypt, Syria and Jordan or the other 132 countries where Abdullah says Palestinians reside. Abdullah said that “even Palestinian refugees who are living in [refugee camps] inside the [Palestinian] state, they are still refugees. They will not be considered citizens.”

Let's read that again, shall we?

"Even Palestinian refugees who are living in [refugee camps] inside the [Palestinian] state, they are still refugees. They will not be considered citizens."

People who live in camps in their own state would be barred, by their own leaders, from becoming citizens of that very state!

Why? Because, to Palestinian Arab leaders, the "refugees" are not an oppressed group who must be helped. They are human weapons in a never ending war against Israel. Giving them citizenship removes their status as weapons.

The most important issue to the Palestinian Arab leadership is not to end the suffering of their people, or achieving independence. It is to destroy Israel, using the nonexistent "right of return." Nothing could be more obvious - yet most of the world refuses to believe that Mahmoud Abbas and his cronies could possibly be so indescribably cruel and callous to their own people.

Abdullah said that the new Palestinian state would “absolutely not” be issuing Palestinian passports to refugees.

Neither this definitional status nor U.N. statehood, Abdullah says, would affect the eventual return of refugees to Palestine. “How the issue of the right of return will be solved I don’t know, it’s too early [to say], but it is a sacred right that has to be dealt with and solved [with] the acceptance of all.” He says statehood “will never affect the right of return for Palestinian refugees.”

And make it easier for Palestinian Arabs to achieve their real goal - the end of the Jewish state.

For 63 years, three generations of Palestinian Arabs are being brought up being told that they must return to a non-existent state that their ancestors came from, and nothing else is acceptable. And the potential establishment of a Palestinian Arab state would ironically make their wishes to become citizens even more remote.

If there is to be a Palestinian Arab uprising, it should be against leaders like these who are happy to tell their own people to stay in hell - and to be happy about it.
Posted by GS Don Morris, Ph.D./Chana Givon at 3:12 PM