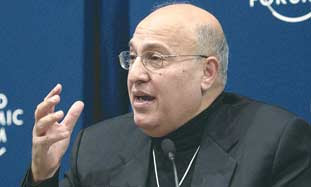 
The Palestinian Authority announced on Thursday that Spain has decided to recognize a Palestinian state along the 1967 lines before September. A spanish diplomat told Palestinian negotiator Nabil Shaath that Spain would support making the state of Palestine a UN member.

The announcement came as Palestinian Authority President Mahmoud Abbas met in Cairo on Monday, under the auspices of Egyptian authorities, with Ramadan Shallah, Secretary-General of the Islamic Jihad organization, and his deputy, Ziad Nakhleh. The meeting between Abbas and the Syrian-based Islamic Jihad leaders dealt with ways of consolidating Palestinian national reconciliation, a PA official said.

The two sides also discussed the PA security crackdown on Islamic Jihad operatives and supporters in the West Bank, the official said.

Islamic Jihad has condemned the ongoing crackdown and urged the PA to release all its men, especially in wake of the Hamas-Fatah reconciliation accord that was reached in Cairo three weeks ago.

Under the former regime of Hosni Mubarak, Islamic Jihad leaders and members were unwelcome in Egypt.

An Islamic Jihad official said that the talks also focused on ways of “confronting future challenges and Israeli threats.” He described the meeting with Abbas as positive and thorough.

Abbas, who arrived in Cairo, also held talks with Gen. Hussein Tantawi, head of the Supreme Council of the Armed Forces, and briefed him on the latest developments surrounding the stalled Middle East peace process.

Abbas also briefed Tantawi on the outcome of the emergency meeting of Arab League foreign ministers in Qatar last weekend.

The ministers voiced their backing for Abbas’s plan to ask the United Nations in September to recognize a Palestinian state on the 1967 lines.
.
Abbas is also seeking Cairo’s help in overcoming differences with Hamas over the establishment of a unity government in accordance with the reconciliation agreement.

PA negotiator Nabil Shaath announced on Monday that Spain was planning to recognize the Palestinian state before September.

Shaath’s announcement came after he met in Ramallah with Spanish Consul-General Alfonso Portable.

Shaath said that the PA was pursuing its efforts to secure additional backing and international recognition for the statehood bid.

He said that the Spanish diplomat stressed that his country would support making the state of Palestine a member of the UN.

Shaath said that he was planning to visit Armenia, Moldavia, the Philippines, Mexico and Columbia to persuade them to support the statehood bid in September.


Comment: I re-posted this May piece as a reminder who our firneds are not-
Posted by GS Don Morris, Ph.D./Chana Givon at 6:59 AM