Paramedic Found His Wounded Family in the Hospital 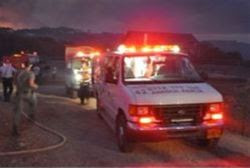 A paramedic who rushed to the scene of a Grad attack, later discovered members of his own family had been wounded in the same attack.
by Elad Benari
Published: 21/08/11

With terrorists from Gaza bombarding southern Israel with missiles and rockets on Saturday, the region’s Magen David Adom paramedics were hard at work treating victims and saving lives.

In many cases the paramedics have to leave behind their own families, who live themselves in the areas under fire, and go out to places hit by the rockets.

One paramedic felt this difficult reality more than others on Saturday, when he arrived at the Soroka Hospital in Be’er Sheva after helping to evacuate victims from the Grad missile attack on the city, in which Yossi Ben Shoshan was killed. Upon arrival at Soroka, the paramedic was surprised to discover that members of his family had been hurt in the attack and were admitted to the hospital. His sister-in-law was lightly wounded, his brother had been moderately wounded, and his niece was seriously wounded.

In total, terrorists have fired around 50 rockets into Israeli territory since Thursday night. Four people are wounded in serious condition, suffering life-threatening wounds.

The Iron Dome system has shot down some rockets. The IDF has responded by hitting numerous sites in Gaza including several terrorist outposts, killing another of the heads of the PMC terror group that had claimed responsibility for Thursday's terrorist attacks. The master PMC planner was killed on Thursday along with two other heads of the group.

On Friday, Hamas officially ended an often-broken ceasefire with Israel, openly involving Gaza's leadership in the attacks.
Posted by GS Don Morris, Ph.D./Chana Givon at 7:32 AM