Dispute in Israel over Hamas role in recent rocket fire 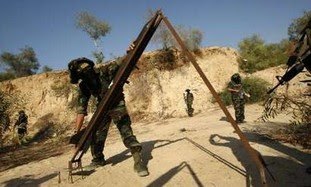 Some defense officials believe Hamas actively fired rockets into Israel, others claim they sat on sidelines as smaller groups attacked.


The Israeli intelligence community is in disagreement regarding Hamas’s involvement in the recent round of violence between Israel and terrorist organizations in the Gaza Strip.

Officially, Hamas has claimed it was not involved in the attacks near Eilat on Thursday, which Israel attributed to the Popular Resistance Committees, or in the firing of more than 150 rockets and mortars into Israel, which came to a tentative end on Monday with the institution of a tense ceasefire.
Defense officials told The Jerusalem Post on Tuesday that there were two conflicting schools of thought within the intelligence community – those who believe that Hamas actively fired rockets into Israel and those who claim that Hamas sat on the sidelines during the rocket fire, which was carried out by smaller terror groups based in Gaza.

One source of the confusion came on Saturday night when a number of Gradmodel Katyusha rockets were fired at Ofakim from an area of the Gaza Strip believed to be under Hamas control.

While the Hamas leadership denied its involvement, lower-level field operatives issued a claim of responsibility on the website of the Kassam Martyrs Brigade, Hamas’s military wing.

“Hamas, for the most part, appears to have sat out this recent conflict and did not actively participate in the firing,” one defense official said.

The Intelligence and Terrorism Information Center issued a report on Tuesday detailing the rocket fire into Israel during the recent round of violence, showing that Islamic Jihad fired most of the projectiles and the PRC several dozen.

The intelligence official said the confusion surrounding Hamas’s claim of responsibility for the rocket fire into Ofakim was likely an example of the disagreement within the terror group’s leadership over whether it should or should not be actively attacking Israel.

Hamas’s absence from direct participation in the attacks is understood within Military Intelligence to be the result of a number of factors, which include concern that it would be blamed for thwarting the Palestinian bid for statehood at the United Nations next month.

In addition, Hamas is believed to be concerned that an escalation in fighting would strain its newlyrestored ties with the interim government in Egypt, and would additionally undermine its general efforts to rebuild infrastructure that was damaged during Operation Cast Lead two years ago.
Posted by GS Don Morris, Ph.D./Chana Givon at 10:00 AM